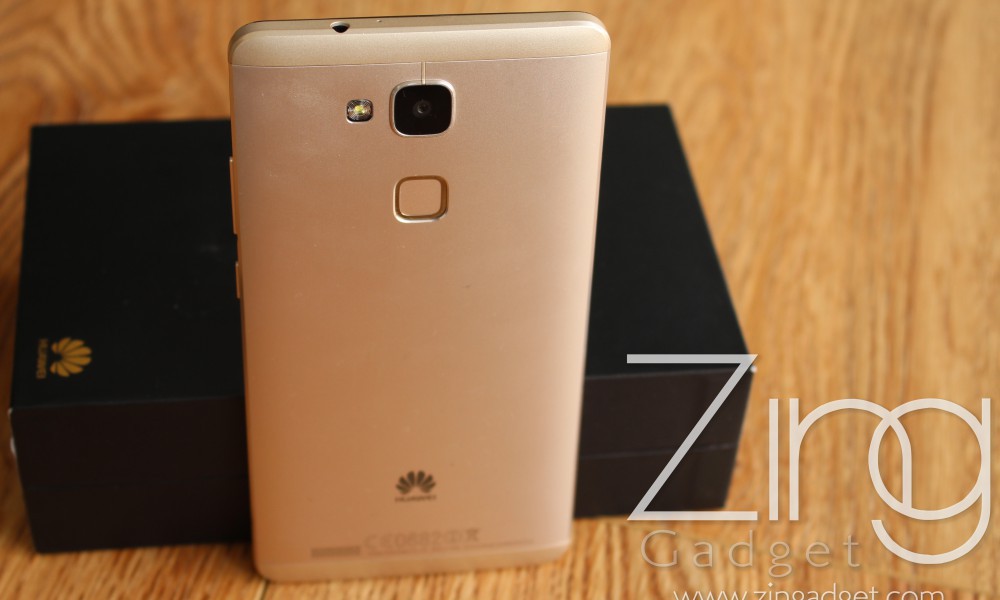 The Ascend Mate 7 is the Huawei flagship from 2014. Sporting octa-core processor with 2 cores, it features a 6 inches display with fingerprint scanner on the back.

Here are the specification list of the Huawei Ascend Mate 7 :-

Our review unit of the Huawei Ascend Mate 7 comes with gold pleated finish which appear elegant but not too old-fashioned. The metallic finish that coated the whole device makes it looks more premium with less plasticky feeling. The thickness of the Huawei Ascent Mate 7 is only 7.9 which is relatively slimmer when equipped with such large display. Its display actually takes up more space in the front where the bezel was reduced in large amount. The Full HD capability makes the whole display even more appealing that boosts the selling point of the phone.

The top and bottom bezels only takes up minority of the front side. As usual, the camera, proximity sensor and speaker were found on the top of the Ascent Mate 7; whereas Huawei logo was found on the bottom of the device.

The rear side of the devices was fully coated with metallic gold finishes.  A 13MP camera was located on top of the phone followed by finger print sensor and a Huawei logo was printed on the bottom part of the rear. The top and bottom on the rear part was highlighted and divided with a cut which resembles a similar design on HTC mobiles. The mono speaker grill was located on the bottom which appears small when compared to the whole device.

The power button and the volume rocker was resided on the right panel of Mate 7. Both are positioned near to each other which many cause mis-press when one handed operation. The SIM slots were located on the left side and comes with Dual SIM standby. The second sim slot also can act as microSD slot that provides extra storage if needed. The dual SIM slot has to be eject with a tiny pin in a hole that could increase security but also bring inconveniences.

A 3.5mm headphone jack was located on the top whereas a microUSB charging slot was positioned on the bottom panel. The rear side of the phone uses curved metallic design that felts comfortable as it was design unilateral with the palm. Although the metallic gold coating provides another plus for the phone, the rear ‘T-shaped’ design clearly resembles some product design from HTC that could be debated.

The 6 inches large display constitute up to 77.6% of front part of the Mate 7. With pixel density at 368ppi, the display on the Mate 7 was incomparable in standard 2K display but sufficient to produce Full HD output. Such large display could bring fascinating viewing experience while watching videos or photo, but it does bring alot of inconvenience on single handed operation. In the end it is still based on user preference to choose over small screen or large display phone.

Let’s compare the display between Oppo N3 and Mate 7 (N3 on left; Mate 7 on right)

After a series of comparison, the Mate 7 able to reproduce a much warmer display compared to the Oppo N3. The display standard fits belong to categories of flaghsip but not impressed us.

The Mate 7 runs on Android 4.4 with EMUI 3.0 interface. Swipping from the bottom bezel will reveal some quick shortcuts for settings such as calendar, calculation, flashlight and mirror. You can also instanly changes the next lockscreen wallpaper with the toggle in the quick settings interface. You may share or save your preferred lock screen wallpaper to social media networks or pausing it.

One of the bizzare features of the EMUI 3.0 is there isn’t any app drawer found on the bottom. All of the downloaded and installed apps are shown in each page which can be browse by swipping the home screen. This UI design was widely implemented in smartphone under Chinese manufacturer. On a side note, the icons and user interface was highly correlated with the exterior of the phone which features a gold pleated design and interface.

You may customize the home theme with other 6 pre-loaded themes in the settings store. If you tend to prefer a cleaner and simplistic home screen, there a several customization that sorts each application into categories for easy browsing. The icons are large and simplistic which provides accessibility for the elders.

In the notification menu, Mate 7 uses timeline design which sorts each notification with time and users able to be alerted with different notification and event happening in a descending order.

Huawei stated that their fingerprint sensor can recognizes up to 5 different fingerprints ID. We tested it out and found that unlocking phone or apps access with fingerprint can be blazingly fast as it takes around 1 second to complete the whole process.

The Google apps, Play Store and other Huawei application was come pre-loaded on the phone. Its all depends on usability before judging it as a factory ‘bloatware’

One of the preloaded apps from Huawei are the Phone Manager. It is an app dedicated to cleaning smartphone random access memory and unwanted documents. It is also able to reduce battery consumption upon turning on the battery saving mode.

Based on statistic from the Phone Manager app, the basic RAM consumption of the Mate 7 are 1.28GB with no other unnecessary background process. Thus, there are around 1.6GB RAM available to run other application which is suitable for multitask.

On a side note, there isn’t any lagging or stuttering occur  during our testing, However, switching between apps and home screen could infer some minor delay which is likely caused by unoptimized software or processor. Although the EMUI 3.0 is much more stable from the previous version, there isn’t any innovative feature as some of the design and features were found in user interface of some manufacturer.

Sporting a 13MP rear camera and a 5MP front camera, both of the camera supports image beautification and able to take photos in variety of modes.

The 13MP rear camera is able to photo with resolution up to 4160x3120p. It supports HDR mode, panaroma, beutification and many more. One of the unique feature on the camera is the best photo mode on the Mate 7 which allows user to decide focus point after taking a picture.

The camera also comes with a lot of effect filters where users can choose from.

There are much more settings in the camera which are hidden from the default interface. Those including activating camera with double press on volume rocker, toggling shutter via fingerprint sensor and ISO and AWB adjustment.

Outdoor image shooting are great for this phone. However, it was noted that there were some blurry detail shown on the side of the images below.

The images from above shows the Mate 7 is capable of taking outdoor macro shots. However, there was a weak reproduction of details from the macro shot.

The macro shot above was well taken and most of the details are reproduced on the image (Note the debris on the mouse button).

Most of the food details were highly preserved on the photo above. Note that the light reflection on the oil are accurately reproduced.

The Mate 7 suffer serious detail loss and noise in the image taken above. Looks like there are many room of improvement on this camera.

In the selfie cam, the image beautification of the Mate 7 does not appear realistic. Note that the left eye of the right character was not correlated with the black shown on the right eye.

Although Huawei Ascend Mate 7 wasn’t branded as a camera smartphone, the photo quality from the camera can be largely improved especially on its detail reproduction and noise control. Huawei should be able to do it better.

With such large display, the Mate 7 was packed with 4100mAh battery and comes with a energy saving processor as stated by Huawei. Let’s see how well does the power management performs on the Mate 7.

The Mate 7 comes with a very efficient power management. Only 5-8% of battery were used in while running apps and gaming per half an hour during our experiment. Music playing while dimming display only takes up around 1% of battery. Thus, we can conclude that the 4100mAh battery was sufficient for the Mate 7 to act as daily driver.

After a complete charge, only 4% of battery was drained after 8 hours of standby time. One hour of charging will provides 44% of battery level which doesn’t seem fast but it is normal to charge a smartphone with 4100mAh battery.

The power saving mode can be activated in the settings which provides maximum conservation of energy by changing the display to black and white as shown in above. Many functions will be disabled (even screenshot is not possible) as the phone is only left to make/receive calls, checking message and contact.

The Huawei Mate 7 comes with impressive benchmark score which is higher than certain flagship device. However, there was some error reported in stability test which affect our confidence when this device worked under pressure as a daily driver.

Our testing on gaming and app performance returned fruity result. This device has no issues running graphic intensive game such as Modern Combat 5 to running social media apps. We didn’t face any instability during out testing and such result from the test above could be considered as plausible.

As a 2014 flagship device from Huawei, the Ascend Mate 7 comes with impressive performance as well as long battery life. The addition of the fingerprint sensor also largely improves the security of the whole device. However, the only down point of the Mate 7 is the camera, which performs sub-par when compared to other device. In short, the Huawei Ascend Mate 7 is a elegant device that can sastisfy your daily needs from connecting people to playing intensive game. However, we do expect more from Huawei in pushing more features onto the next flagship, Huawei Ascend Mate P8.

It is not the first time that the HUAWEI Mate X2 render has leaked online. This time, the leak includes a complete render of the ...