Alphabet is the new boss of Google 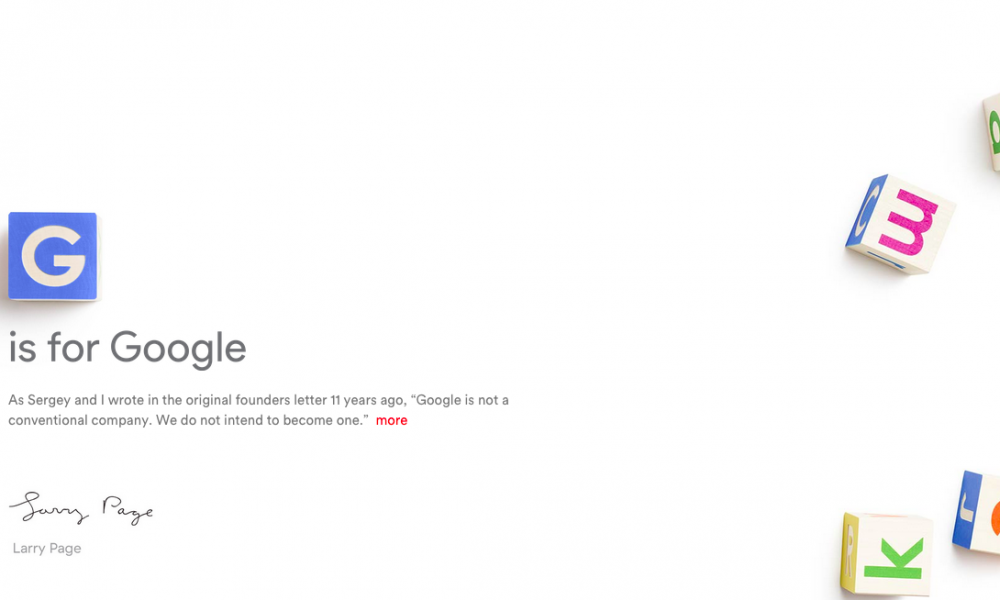 On the 10 September 2015 marks the revolutionary page of the internet, the Google is now under a company named Alphabet. This company seems initially pop out of no where and you might wonder who have such capabilities and resource to take over the mega tech giant Google at a single night?

On the latest update of Google blog, Larry Page – the Google CEO has explained his initiative in creating Alphabet where Google falls into one of its subsidiary company. The website https://abc.xyz was created after the creation of Alphabet he explained below

“…What is Alphabet? Alphabet is mostly a collection of companies. The largest of which, of course, is Google. This newer Google is a bit slimmed down, with the companies that are pretty far afield of our main Internet products contained in Alphabet instead. What do we mean by far afield? Good examples are our health efforts: Life Sciences (that works on the glucose-sensing contact lens), and Calico (focused on longevity). Fundamentally, we believe this allows us more management scale, as we can run things independently that aren’t very related. Alphabet is about businesses prospering through strong leaders and independence..”

Meanwhile, the new Google is now slimmed down to some extend but still offers existing feature. The Google CEO has also been replaced to Sundar Pichai which handles all the operation of Google includes Android, Youtube, Google Maps etc.

The new Alphabet focus on the upcoming ideas on the research and development of the life science area and some new future tech that focused on innovation and stretching boundaries.

“Alphabet will also include our X lab, which incubates new efforts like Wing, our drone delivery effort. We are also stoked about growing our investment arms, Ventures and Capital, as part of this new structure.”

Looks like Alphabet will be the next big thing? Will Google continues to venture without the lead of these experts? We hope so.