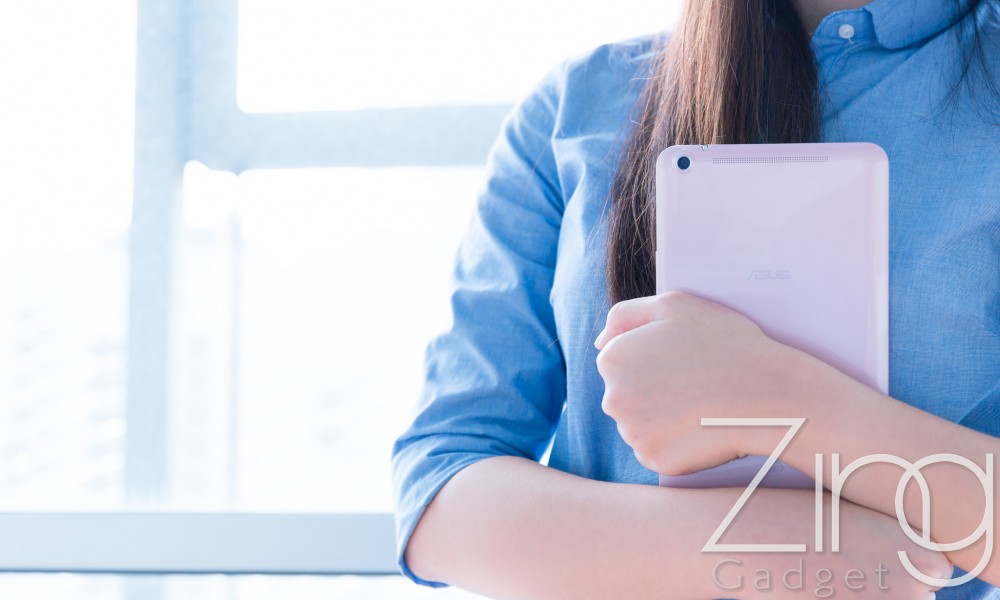 It is a known fact that Asus always been making significant impact in the tablet and smartphone industry based on their high performance to price products. Recently Asus has announced the Memo Pad 8, a sleek and stunning tablet equipped with powerful specification. Our team manage to obtain one of the pink Memo Pad 8 from Asus and lets see how did it performs!

Before we begins, here is the specification of the Memo Pad 8 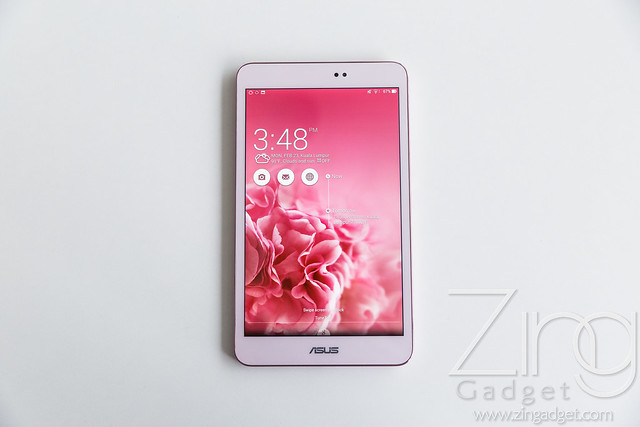 The Asus Memo Pad 8 is a tablet that features a sleek and elegant design. The pink color on the Memo Pad 8 was simply spectacular that will probably attracts more female consumers in the market. It also features a simplistic design with no extra gimmick and feels comfortable during handling 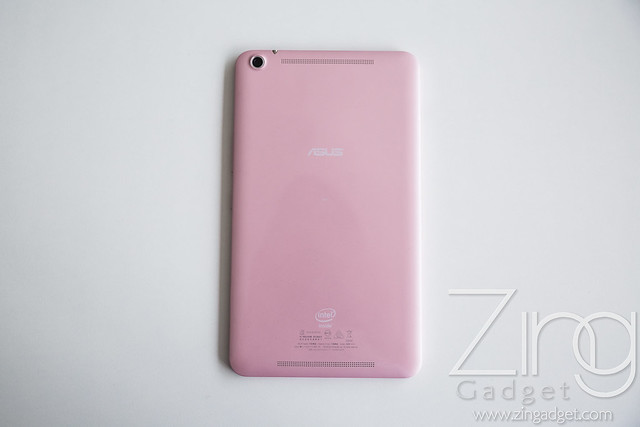 The back cover of the Memo Pad uses glossy plastic materials coated using non-conductive coating technology. However, it is likely that this fingerprints can stick on the back due to its glossy surface. Overall, the Memo Pad provides comfortable handling due to the increase of curvature at the edge of device. 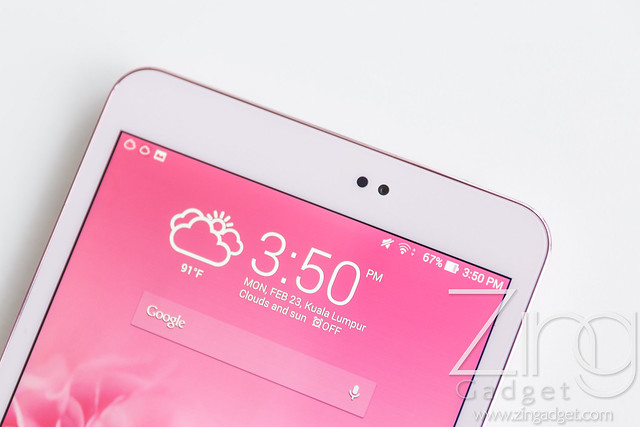 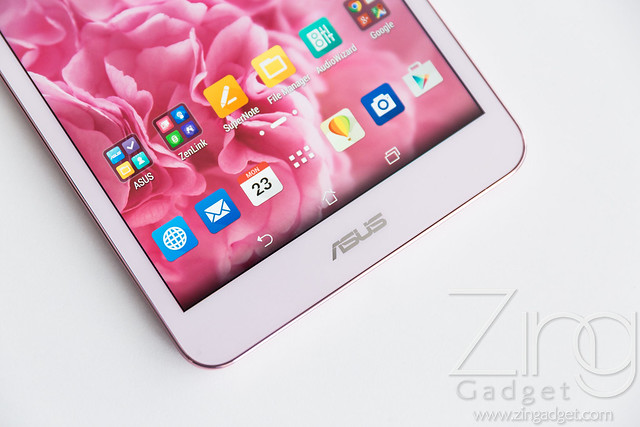 Apart from the Asus logo, there isn’t any hardware button found on the bottom 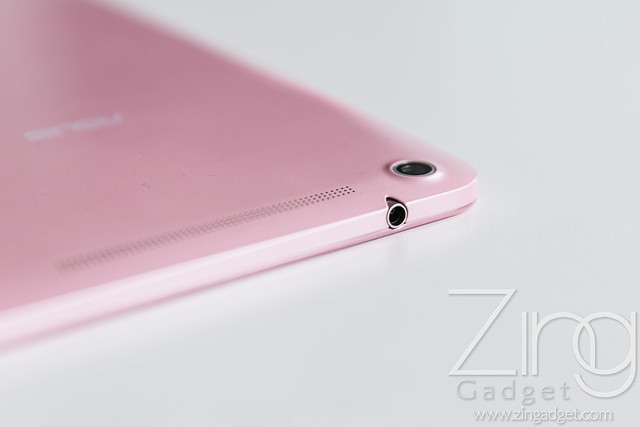 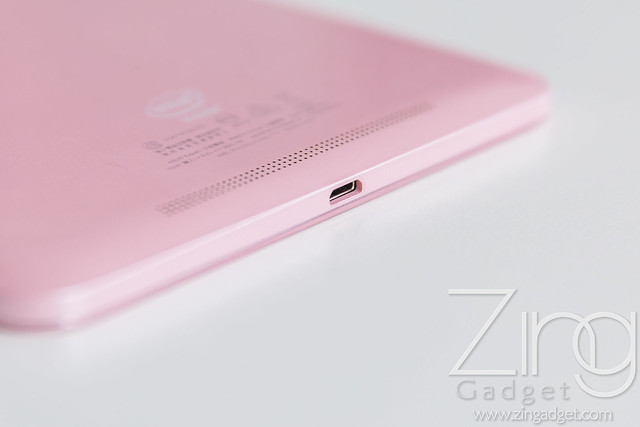 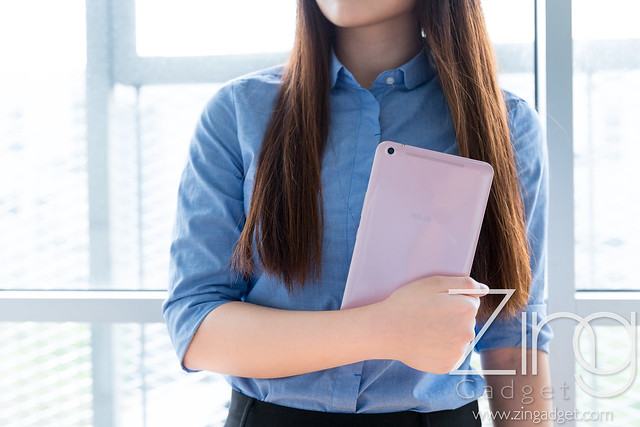 Overall the pink Asus Memo Pad is a sleek and beautiful tablet that supports day to day usage. Our female staffs has been complimenting on the tablet due to saturated pink color and the general design of the tablet.

The Asus Memo Pad 8 uses 8 inches IPS display at 1920 x 1200 resolution. With wide angle viewing up to 178°, group sharing and viewing will no longer be a problem. Asus also implemented the Asus Splendid and True Vivid colour enhancement technology which improves the overall display. Asus Memo Pad 8 also comes with aspect ratio at 16:10 allows users to watch video without the black bar on each side of display 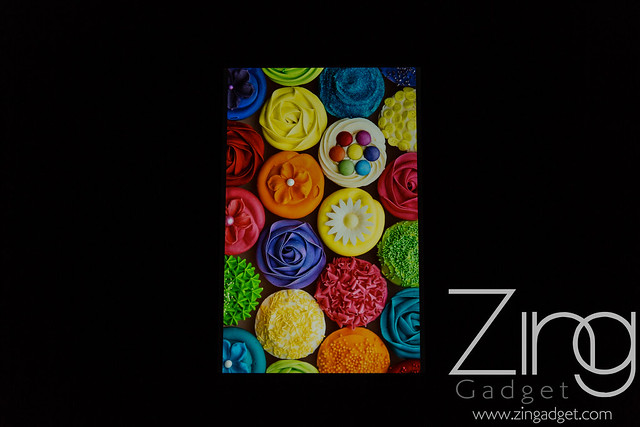 Based on the photo above, Asus Memo Pad does not have colour reproduction and other display issue. Display resolution and saturation can also be manually adjusted in system application. 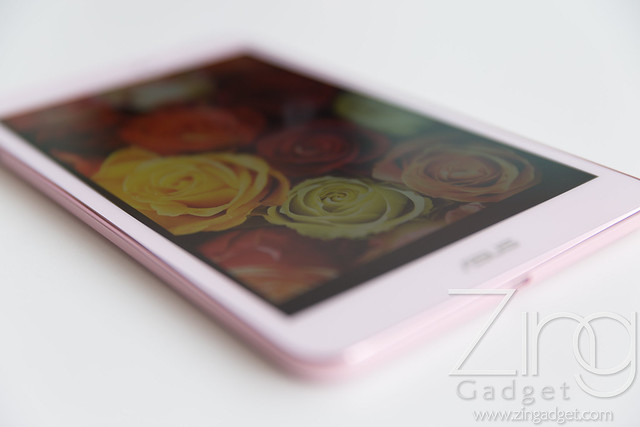 However we noted some minor flaw in display of the Asus Memo Pad 8, however it shouldn’t be a big issue for most.

The pre-installed Asus Splendid is a display enhancement software that can adjust colour temperature and saturation manually. Activating vivid mode will provide higher colour saturation background in display. Asus have pre-installed these applications for the users to tweak the display that fits on different people. 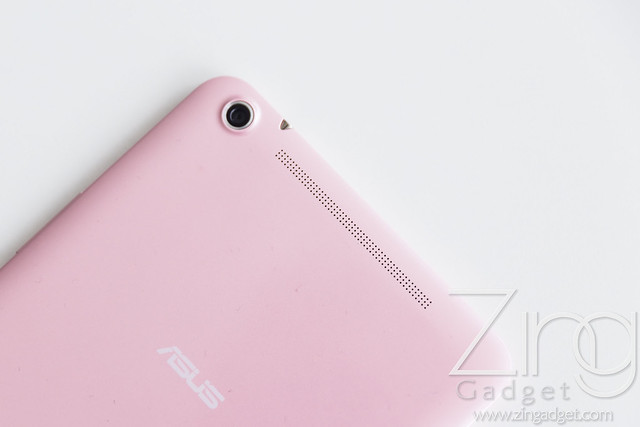 Asus has employed 5MP rear camera on the Asus Memo Pad 8 along with auto-focus and able to records 720p videos. The front facing camera was a 1.2MP camera that is capable of taking selfies with beauty enhancement effect. In terms of its camera, camera specification of Asus Memo Pad 8 does not appears to be the best, neither the worst.

The camera user interface of Asus Media Pad 8 does not differs from other Asus devices. Apart from its simplicity, Asus also provides different capture mode that can be manually adjusted in the setting. The default mode of the camera is in auto, where it detects surrounding light level and makes change to the mode and notify the user.

Lets look at some sample pictures of the Asus Memo Pad 8.

The performance of the camera on Memo Pad 8 in outdoor is barely acceptable. Zooming in will results pixelated images and lower image quality.

The image quality appears to fit in normal standard. However, we don’t use tablets for capturing food images, do we?

The quality of outdoor low-light capturing was just as dreadful as it could be. One of the reason is there is no LED flash comes along with the camera, thus it is unfair to judge and compare with other competitor devices.

Picture above depicts the user interface in front facing camera. It has image beautification, HDR and night mode selection. It also can produce animated image with GIF selection. Let see how well the image from selfie camera is.

The image quality of the front facing camera is great. Unfortunately the photo resolution was low when enlarged compared to other tablet.

In conclusion, we know that Asus Memo Pad does not focus on the camera performance and image quality when it brought to market. The front and rear camera can produce acceptable images quality in brighter environment but does not performs well in low light condition.

Asus Memo Pad 8 is equipped with Intel Atom Z3580, a 64 bit processor clocked at 1.8 GHz. It comes with 2GB of RAM and 16GB of storage and it also supports microSD up to 64GB. However, we experience some lagging when several application were launched in the background that could be due to low RAM issues. The overall user experience also decrease when the tablet suffers from lag, which could be due to processor performance or software optimization

The AnTuTu Benchmarks shows good score compared to other competitor devices such as XiaoMi Mi 3 and Google Nexus 5. The Asus Memo Pad 8 also have acceptable heat output in the back of the tablet even after intensive gaming. The common hot spots was found in area around the camera due to the processor. 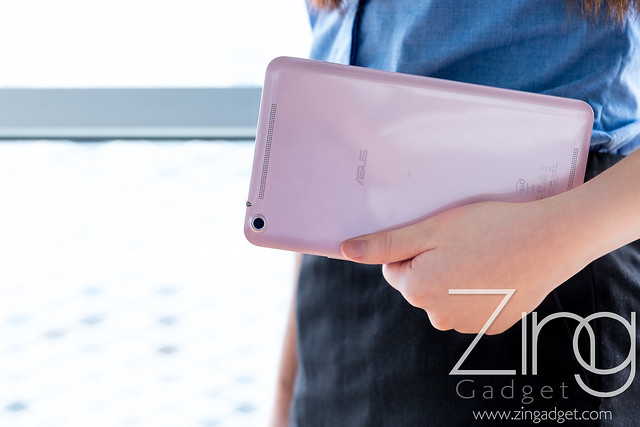 Asus Memo Pad 8 is equipped with 4000mAh of battery which is common on other tablet devices. Here is the battery endurance result tested for 5 hours.

. Besides, 4% of battery was drained during 8 hours of standby time. The charging rate of the Memo Pad 8 is fairly acceptable with 31% per hour using stock charger.

Asus Memo Pad 8 was based on Android 4.4 KitKat with ZenUI. The ZenUI allows personalization and customization of the settings that suits individual needs. The UI also appears simplistic and beautiful that provides convenience for first time user.

The app drawer contains both Apps and Widgets tab that appears similar in stock android.

The Smart Group function in Memo Pad 8 provides automated app sorting that classify applications based on type and sort it into different folders.

The Smart Mode allows user to select the different audio mode based on situation from gaming to movie watching.

In the ZenUI notification and status bar, different features and application were displayed in icon that can be activated when tapped. Long pressing icon opens up the application/function settings.

The pre-installed MyAsus application allows user to contact the customer service from Asus as shown in the left. The recent tab interface also appears similar in other android devices.

Asus has taken the initiative in improving the ZenUI details as shown in above. One of the biggest shortcoming of the tablet is the RAM usage of pre-installed application. Prolonged uses with several application running results in lagging which decreases overall user experience. Overall this tablet is lack of distinctive feature but does performs well generally.

Asus Memo Pad 8 is one of the most elegant tablet found on the market. Apart from its artistic design, the tablet features decent audio playback system and 4G LTE connectivity at such price. One of the imperfection is this tablet does not supports phone call and lack of distinctive features. In terms for performance, there is still room for improvement in software optimization and the battery endurance. In conclusion, Asus should be able to improves certain specification of the tablet at this price point to make it outstanding from others.

Display is one of the most important point that brings a smartphone out from the rest. A new patent has shown that HUAWEI is developing ...