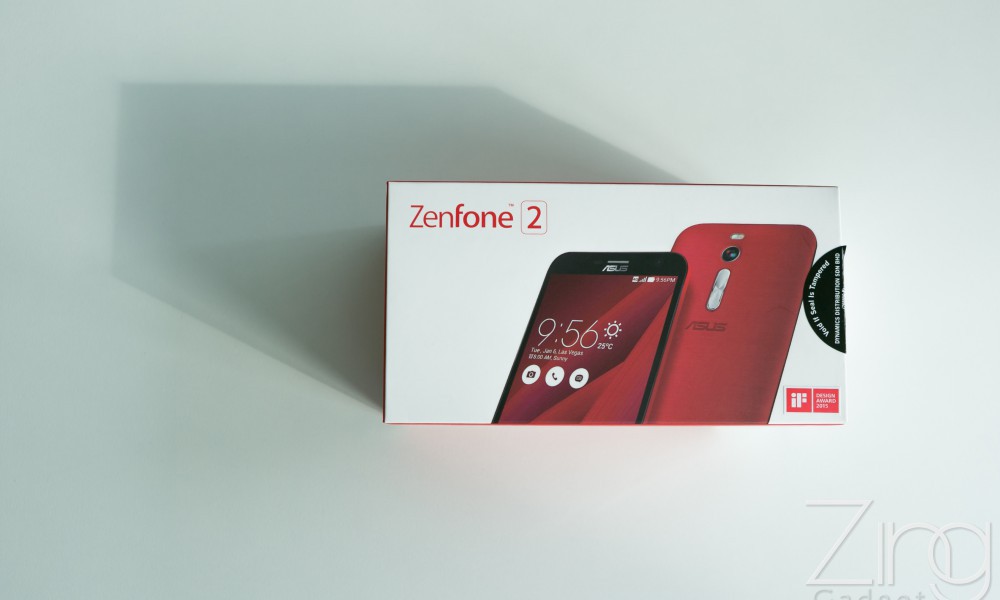 It has been awhile that the Asus Zenfone 2 has launched in Malaysia. Previously announced in Taiwan and Indonesia, Asus Zenfone 2 is the first smartphone in the world that features a striking 4GB RAM in a smartphone. Apart from 4GB RAM, the Asus Zenfone 2 also packs with Intel Atom processor that able to provide day to day support in smartphone computing. Nevertheless, the Zenfone 2 is a significant upgrade from the previous first generation Zenfone that now comes with higher performance and also larger RAM and better camera. Without further ado, let’s unbox the Zenfone 2 and test it!

All of the features in the Zenfone 2 were listed and highligted on the side of the box.

Apart from the phone model, the box also comes with the data cable and the 9V/2A power adapter!

The Zenfone 2 still comes with a similar UI with its predecessor (Zenfone 4, 5, 6).

The rear section of the phone is design in curve so that it fits well and comfortable on hand. There isn’t any hardware keys located on the side of the smartphone as all of the key were located on the back just like the LG G series.

The power button was moved onto the top! Small handled or single handed users might found this a difficult issue to deal with. However, Asus Zenfone 2 can be unlocked with double tap!

One of the greatest design feature of the Asus Zenfone 2 is the concentric circle design on the back. This allow users to detects the location of the volume rocker keys on the back without looking at the phone.

The speaker grill was located on the rear side of the smartphone. Holding the smartphone in landscape mode might blurred the sound output and quality! The low and mid of the speaker are lack of punch in our point of view.

Beneath the removable back cover, there are 2 SIM slots and a microSD slot. However, the battery is not removable!

Although Zenfone 2 comes with dual SIM standby, only SIM 1 supports 2G/3G/4G network connectivity. Hence, if you encounter any network issues in this device, follow these steps to solve it.

2. Press Reset to default on the top right hand corner of the phone.

The Asus Do It Later is a new feature that allows the user to instantly save a screenshot of the display and by shaking the device twice. The screenshot will then be saved on the Do It Later application and can be reviewed later. Although this feature is useful, we found using it is quite a hassle since it can be automatically triggered when playing games or picking up calls from pocket (the gyroscope is indeed sensitive!)

With consideration in storage space saving, the default camera shooting mode in Zenfone 2 are set to 10M (16:9) with quality as standard. However, with 64 GB storage space pre-installed, you dont have to worry about the storage anymore! Simply set your camera settings to 13M (4:3) and details quality to fine! Besides, you can manually adjust the camera settings such as the saturation, contrast, noise reduction and many more!

4. Where are all those RAM?

Where are half of the RAM going? Asus promised that the premium version of the Zenfone 2 will comes with 4GB of total available RAM, but after we boot up the system and found that half of the RAM were already consumed by those junk and pre-installed app! Although the  left over RAM is still lot and does insignificant impact to smartphone performance, but wasting those RAM on bloatware is a great NO!

Because of the 4GB RAM means higher application multitasking capacity, many users tend to download and runs app on the background. Although the amount of left over RAM does not affect the performance of this device, the CPU can be constantly stressed by those apps and causing unnecessary overheating. Even when Asus has released several upgrades that optimizes the app ecosystem and the firmware, overheating on the Zenfone 2 still can be found and complained by the user. Here’s our way to cool down the CPU

By pressing Cool Down, the Clean Master instantly  terminate the background application that hogs the processor. It also can be manually done in the settings (if you are an Android geek).

With the power button translocated into the top of the device, single handed operation could be fussy and difficult for some. Hence, Asus Zenfone 2 comes with a Double Tap option that instantly turns on the display and turn it off too. However, there is something you might not know. Apart from turning off the display on the homescreen, you can double tap the notification bar on the top of the display in any application to instantly turn the screen off! Try it now!

Apart from those firmware bugs and overheating that we encounter in our 1 week of testing, the 4GB RAM Zenfone 2 is indeed one of the powerful smartphone out there that has high multitasking capacity. Hopefully more updates will be rolling out so that those annoying issue can be fixed! Want more? stay tuned at Zing Gadget for the upcoming review of this device!

Inspired by the Grammy Award winning producer Quincy Jones, comes the AKG N90Q, a state of the art, flagship level headphone that represents the pinnacle ...