Confirmed: Huawei nova 5i Pro launching on 26 July in China 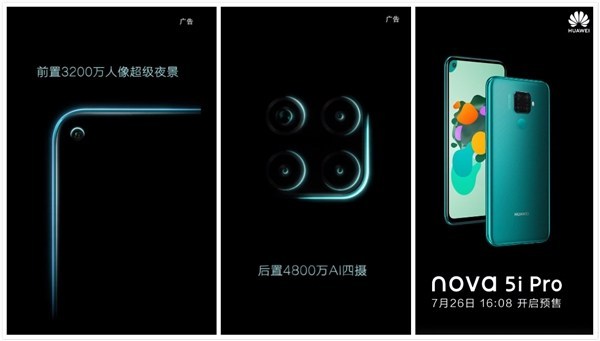 Following our previous report yesterday, Huawei today had announced that the Huawei nova 5i Pro will be launching on 26th July in China. Based on teaser images from their official Weibo account, it is confirmed that Huawei nova 5i Pro will comes with a punch-hole display with a 32MP selfie camera, and also a quad-camera setup that shows striking resemblance to the Huawei Mate 20.

For the specifications, based on previous leaks and official teaser images, Huawei nova 5i Pro are expected to equipped with a 6.26 inch punch-hole display, the latest 7nm Kirin 810 SoC, up to 8GB of RAM and 256GB of ROM, and a 4000mAh battery. Besides, the device will also comes with 3 color options, which is Emerald Green, Black and Twilight.

Despite being confirmed to launch in China, there is currently no official information on the official Malaysia release. As the bigger brother, the nova 5 and nova 5 Pro which launched in China last month is still not available in Malaysia market yet, we might need to wait a little longer for nova 5i Pro to be ofiicially awailable to local comsumers.

If you are looking forward to upgrade your phone to Samsung Galaxy S10, look no further! Samsung has recently launched the #iChanged campagin where you ...