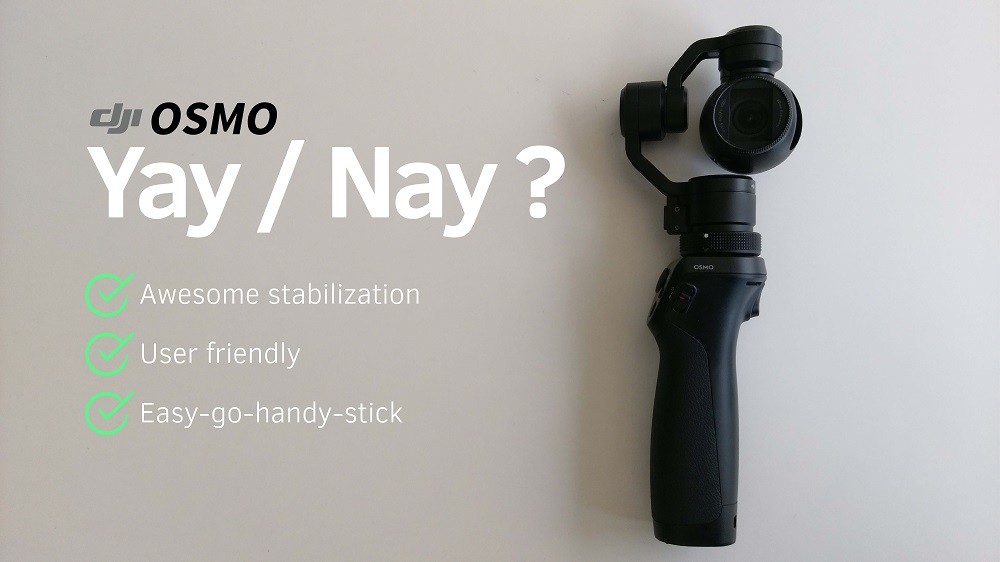 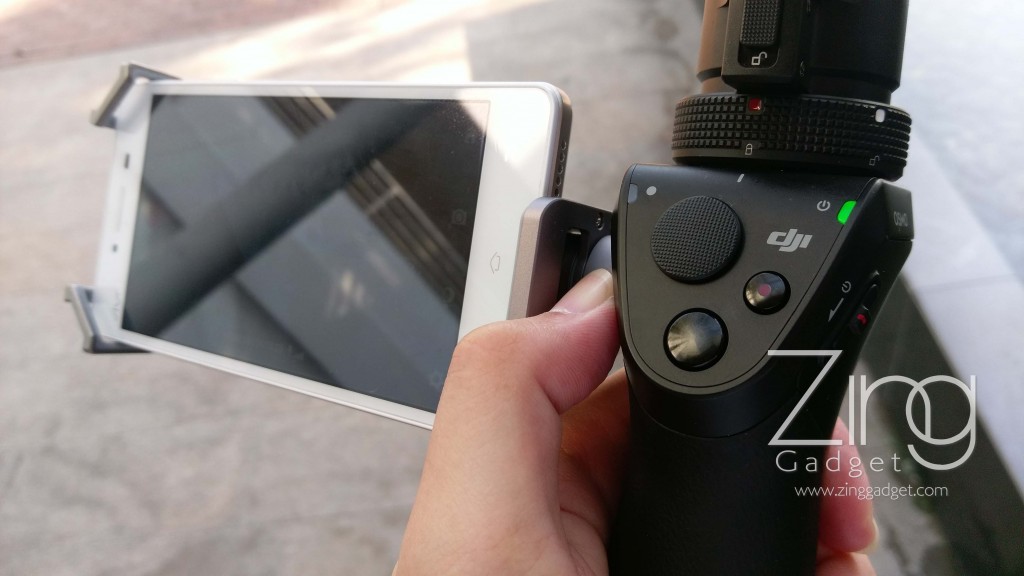 See that joystick right there? That’s some PlayStation nostalgia!

The much anticipated DJI Osmo has been introduced to the world for almost a year now, and many has its taste in one of DJI’s most prized possession. Some seen it in random commercials, some thanks to the Osmo’s big daddy drone – the Phantom, while some, like for me, seen it on my travels. The idea of a hand-held camera stabilizer comes not as a surprise, but a much awaited of what the DJI has to offer. Oh, did I forget to mention that this hand-held stabilizer is compatible to your smartphone device?

If you have not heard about the DJI Osmo, it is practically a 4K “stedicam” mounted on a gimbal (aka stabilizer) on top of a handle grip. You can then set your smartphone to the DJI Osmo via the DJI Go App for control, settings and function like how a normal camera does. The handle then comes with the triggers, buttons and joystick rotator (something like a PS4 controller) – giving you total control. 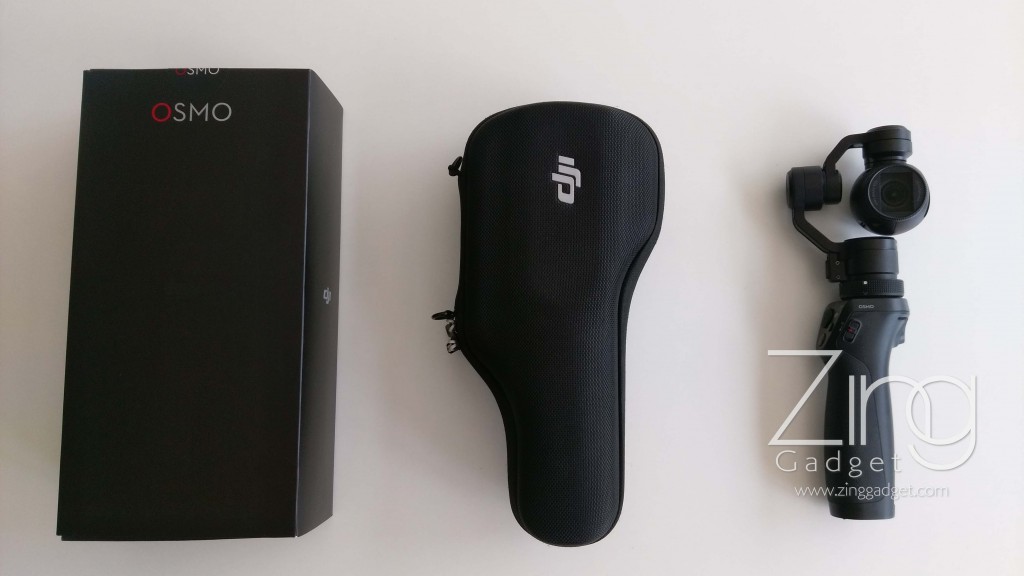 The very first child of the stabilizer category first gave me an impression that other steady cams, especially with gimbals can kiss themselves goodbye and that almost happen to be the case. It indeed gave me the experience as one of the best, if not the best hand-held gimbal in the current market, with its comfortable grip giving you much control and fun in its complete form. 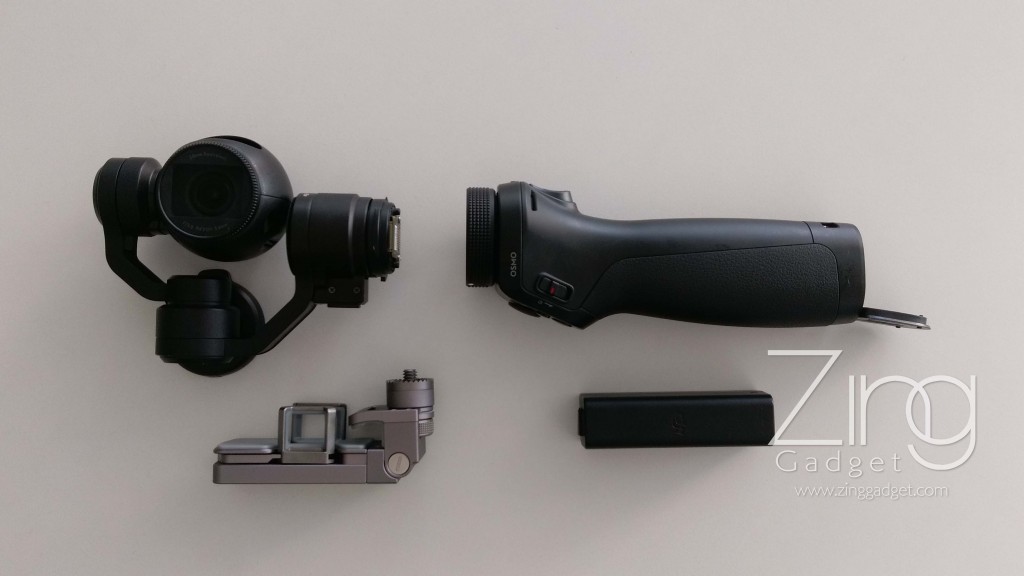 As you unbox the package you will find the handle along with the gimbal and the camera head – all in black. While the silver thingy is the smartphone holder, which will become your screen. Think about it, you’re holding a cool hand-held camera with your smartphone to be its best friend! Some may think it’s weird, but for me that is a cool factor.

Breaking down, the Osmo comes in four parts: a Zenmuse 3 three-axis gimbal attached with a camera, a handle with trigger and control buttons, the phone clamp (a.k.a smartphone device holder) and the battery to power it up (duh). A 16GB MicroSD card is included to kick start your experience, with a casing and strap to opt for your travels. To complete the whole operation manual of the Osmo, any smart device – Android 5 or Iphone5s above and a max size of 5.5”- is compatible to be its screen and overall control panel. The magic that sparks the DJI Osmo is none other than DJI’s very own user friendly app – the DJI GO. Just grab it on the Play Store for Android users or the App Store for Apple owners. 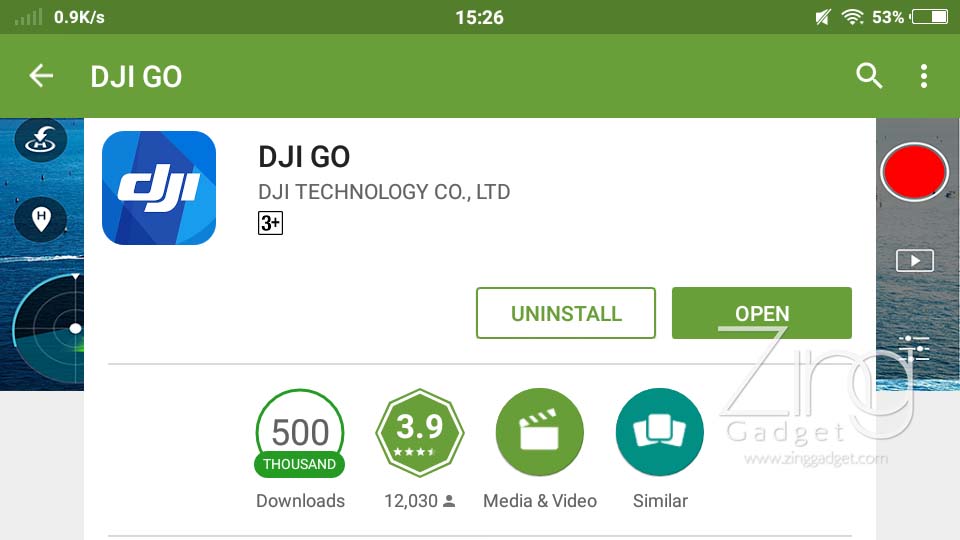 The DJI GO app – it should hit the 1 million downloads mark, soon

You got it all starting? Good, now comes the fun part – making the DJI Osmo your best friend.  Setting up is easy, all you need to know is to make sure your smartphone device is WiFi connected to the Osmo’s very own Wi-Fi portal. You may have to check which device your smartphone is connecting to though. You’ll get used to it after a few attempts – and hearing the “beeps” over and over again.

Now that you’re connected to the Wi-Fi, unlock all three gimbal locks and patch up your preferred smartphone to the detachable phone holder and the eye is set. Congrats, you are one step closer to be the next Michael Bay/ Christopher Nolan/ Steven Spielberg. 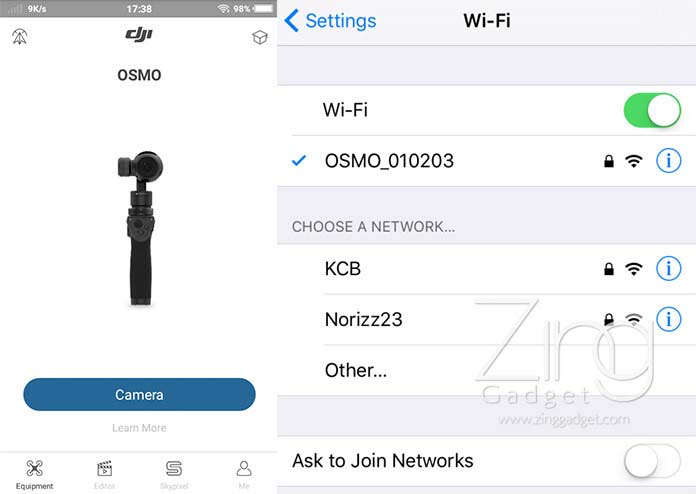 This is what you get, sort of

If you are a DJI geek so far, the Osmo’s Zenmuse X3module is already the gimbal-camera with its big reputation. The impressive Sony Exmor R CMOS sensor and a 20mm lens capable of focus of at least 1.5mm – while measuring an aperture of f/2.8, shutter speed of 8s-1/8000s and ISO range up to 3200 – gave me the feels that this is one beauty to look out for. Another plus point would be its capable Manual settings that gives a total control as you dominate the Osmo. Your video resolutions will read at 4,096 x 2,160 at 24fps or 3,840 x 2,160 at 30fps/24fps. Max range measures up at 60fps at either 1080p or 720p, or slow motion with 120fps at 1080p. If you are yet to be impressed, wait till you see it’s smooth like peanut butter (without the nuts of course) video sample. 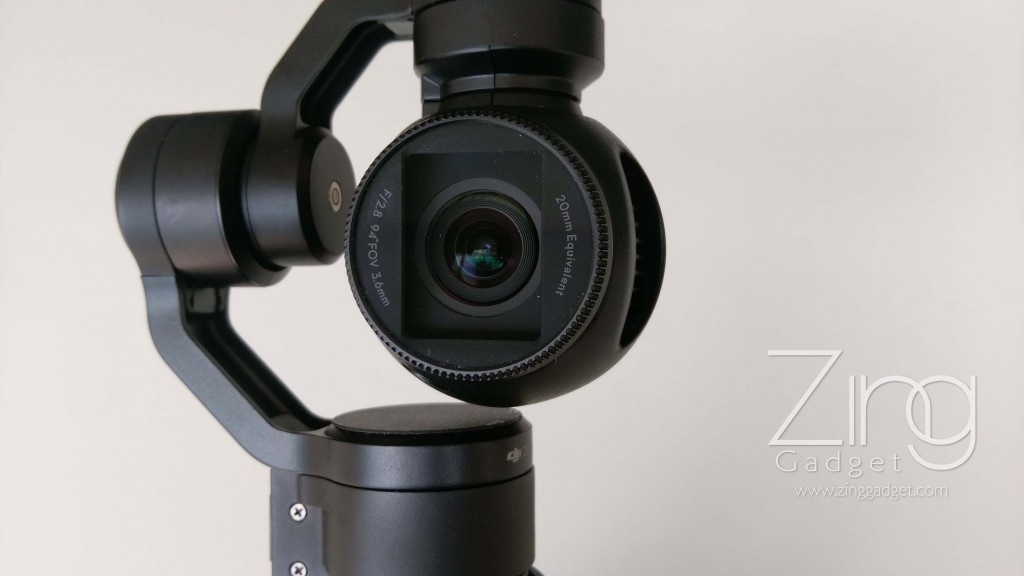 The eye of Sauron 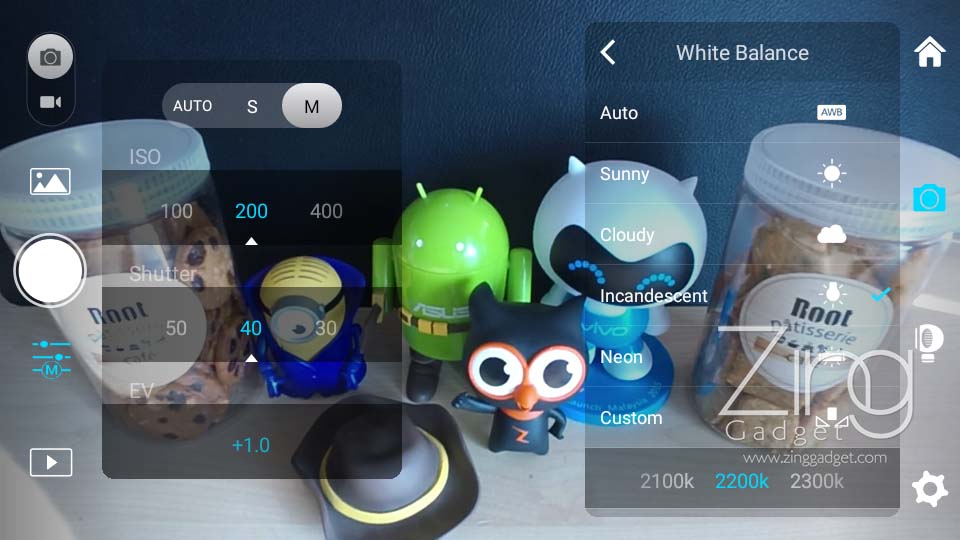 Set from Auto, Shutter-Priority, and Manual mode to your heart’s desire

One magnificent feature the Osmo immediately blow me away was the awesome smooth clips you can get out of it. Similarly, you can’t deny the remarkable photo quality result. With a little tweak, adjustment and familiarity you can make the camera work to the way you want it. The customized features literally give you total control on that little gimbal on a stick (that’s what some call it). All in all, what you get is a cool fresh 1080p in every snap and action you get. Oh and did I missed about the awesome slow-motion video at 1080p and a whooping 120fps? BAM! Play with the settings, know this dude well and you’re on! 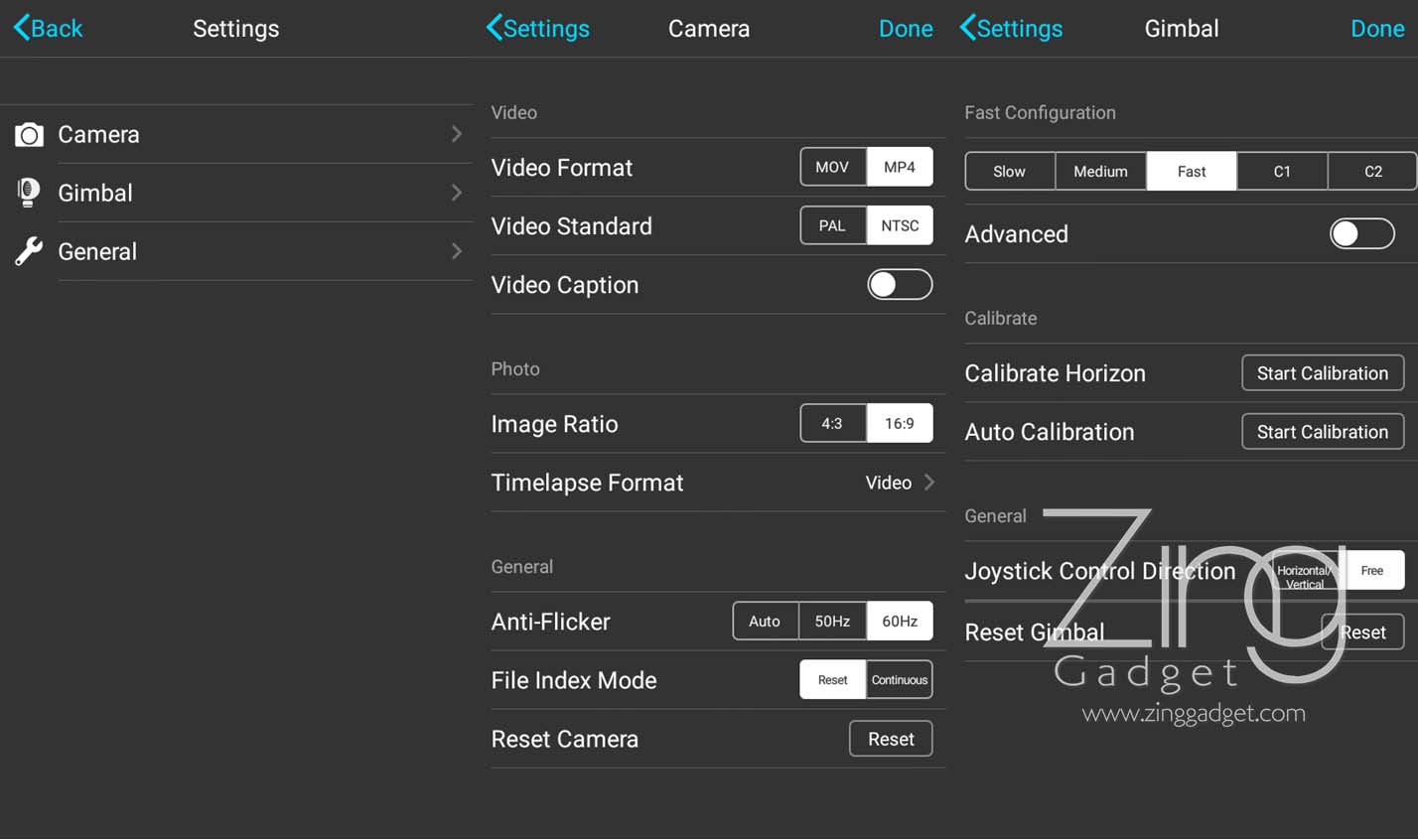 Settings – to get you going

To operate the Osmo, power it up and you will have access to the controls:

4.) Power – to switch on and off the Osmo device

The gimbal can be operated by unlocking it manually. Remember to unlock it before connecting to the DJI App for a smooth start, or else you’ll be annoyed on why the camera isn’t moving when you start up! 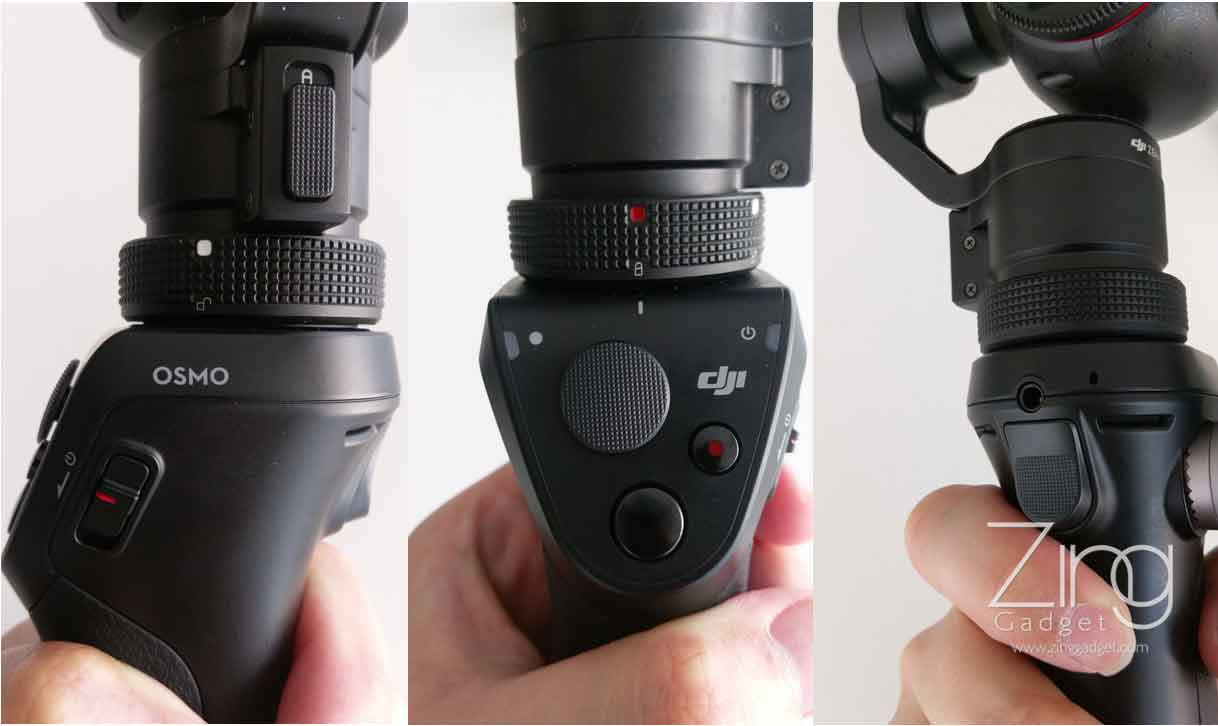 Each controls give you different options you can play with the Osmo. More importantly, it can be done single-handedly (yes in just one hand!) For instance, using your right hand you can either power on, power off, capture, record, rotate or trigger any of these buttons using your thumb and index fingers. So for any lefties, you gotta get used holding this fella with the unfamiliar (for some) right hand. Overall, it’s an easy and handle friendly stick so no worries. Trust me on this! 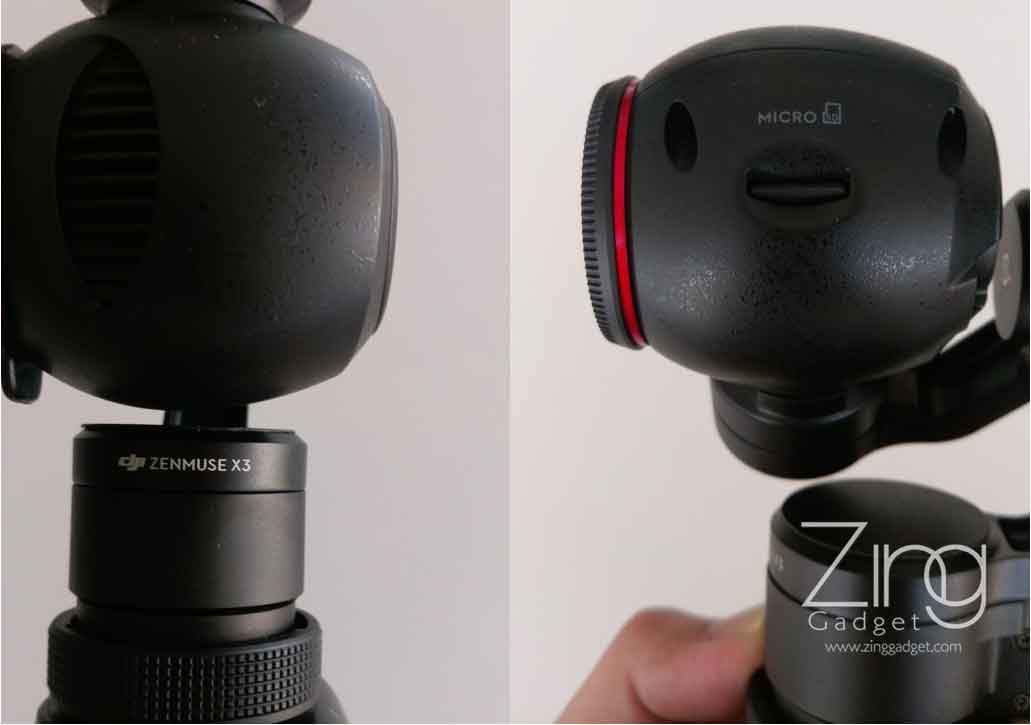 Heads up, the Zenmuse X3 is here!

To cut away the cliché, the Zenmuse X3 spells as the 3-axis intelligent gimbal capable from 90° up to 180° rotation to suit the atmosphere of your recording/photo taking. It functions as the major anchor to avoid the camera from tilting (moving by itself in imbalance). The camera head also has a slot for your Micro SD card that supports up to 64GB; Class 10 or UHS-1. FYI, the main heat source is from the camera head (that’s why I nicknamed it the eye of Sauron from Lord Of The Rings) 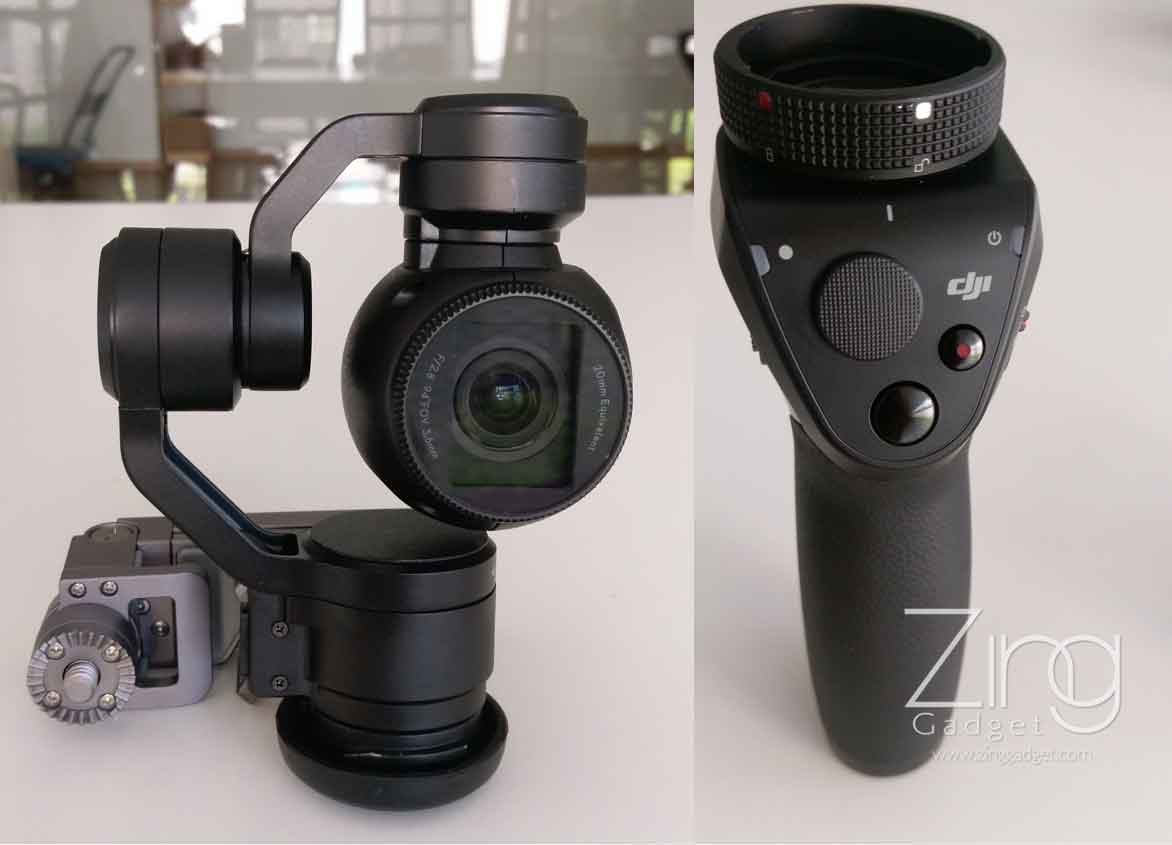 You can easily dissemble the parts (with the power off of course) to deeply appreciate the beauty of the Osmo. Rotate it left and you can pull of the gimbal-camera from the handle to play a little balance game with the parts too. You may realize the handle is lighter (201g with battery) compared to the gimbal (221g)

You can separate this silver metal thingy completely and it looks something like this. If you are wondering if the clamp will leave a mark on your phone, fret not as the rubber clamps inside will protect your techie device partner.

Each photo captured comes only in the format of JPEG images. The videos however gives you the choice between MP4 and MOV, which doesn’t really make much of a difference if you know your video stuff. A suitable partner for your travels (other than your travel partner of course) will bring your video taking experience to a whole new level. Of course in some tools, there will always be a Jekyll and Hyde fairy tale. From my experience, daylight video taking is magnificent-to-the-bomb. No issues whatsoever with its outstanding quality. Night time video however makes me cringe. You can clearly see the noise right at your screen or the dark scenes of your video or photo taking result. That’s just the minor negative point for me.

All in all, the full mechanical stabilization makes the Osmo ahead of the chasing pack. Some smartphone and cameras can argue on having an in built in IS (Image Stabilization) device and the hassle of carrying another tool around, which may not be for everyone. Trust me on this though, the Osmo is already the speedster of the future. 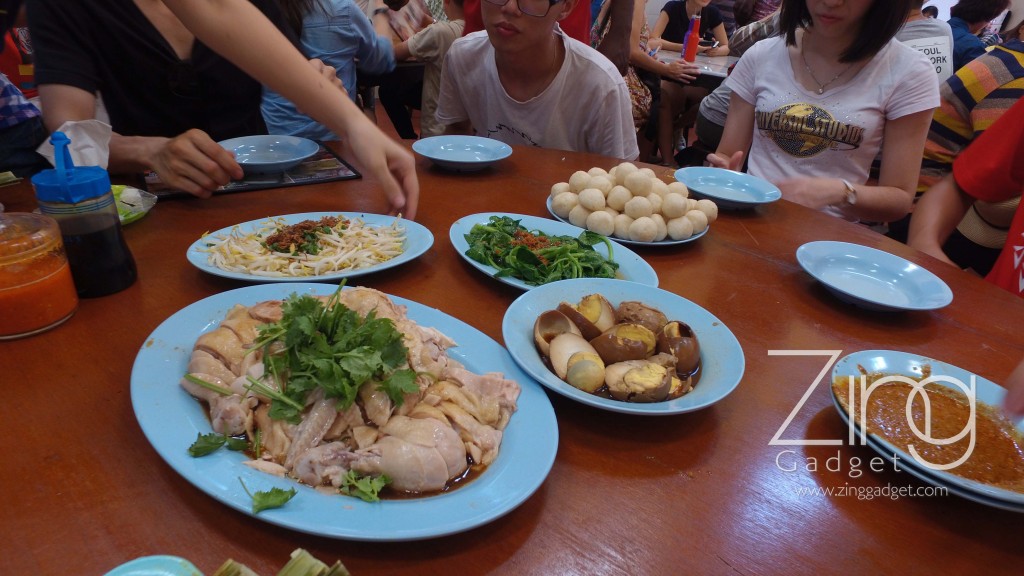 As usual, the camera eats first before the stomach 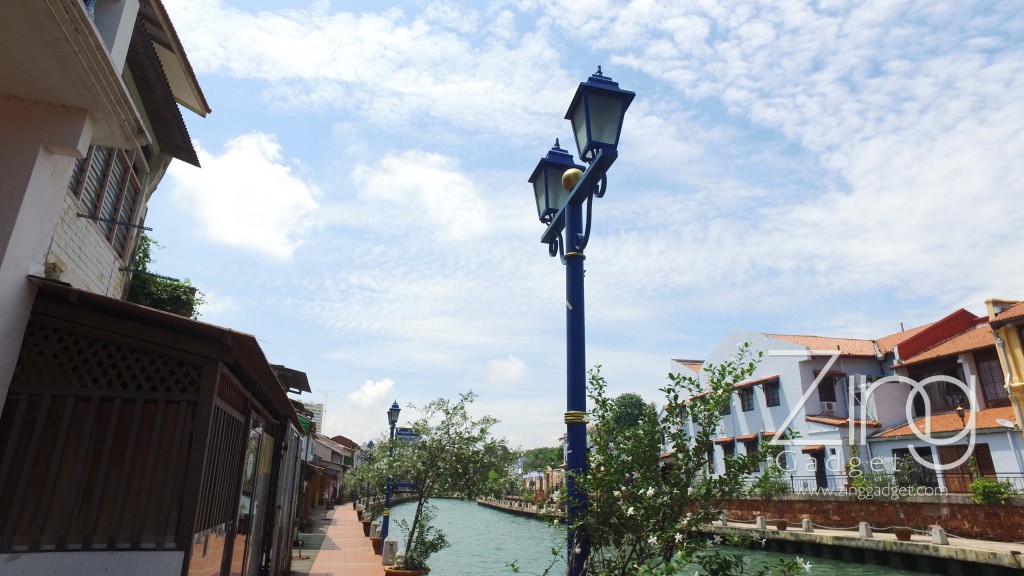 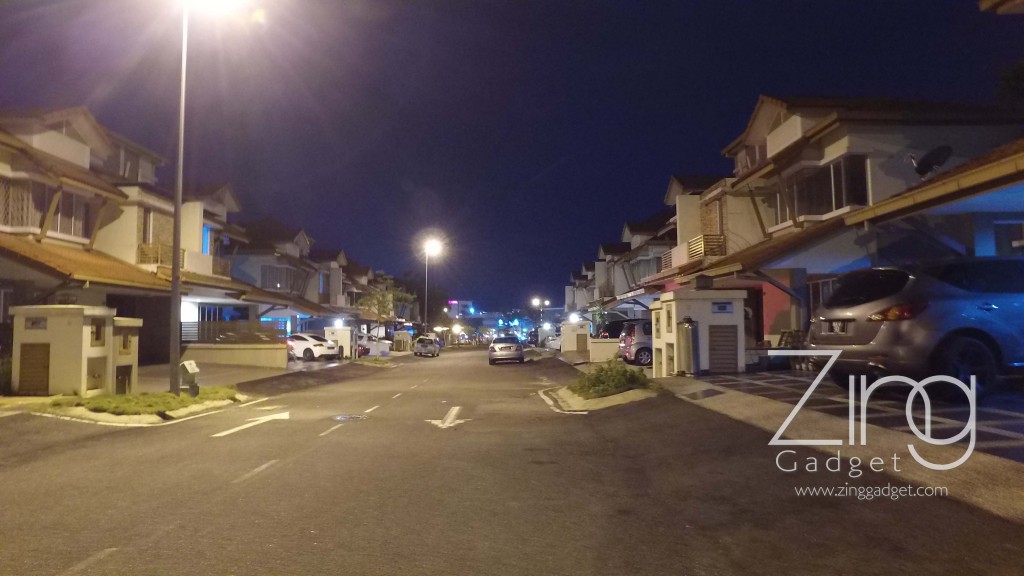 Sadly for me, night time shots ain’t that cool

One bit part that caught me a little off guard was the color while recording on low light or night time. You can either sense a little noise coming around from the video quality or just plain darkness sometimes. Perhaps you may need to bring your own light to justify the night settings. We’ll just let the video take you to another level of breath-taking wows.

Slow mo – it automatically zooms a bit closer though

Another plus point is that this little stick can take panorama shots too – ranging from 180’ to 360’ for your liking just to spice things up.

This for me, is a sad part and I’m gonna go straight right up. The battery only lasts for 1 hour (yes one hour only) The battery charger itself needs around 1 hour too for a full battery recharge, which only makes the Osmo less convenient over here. Side note though: the one hour battery life could force you to plan in proper what you wanna shoot on that day rather than wasting the heartbeat of the Osmo. If you plan for a longer production outside, it’ll be nice to get a spare battery (or two, maybe three) Still in general, the battery life makes me feel that the ones in the Outlast game lasts longer. 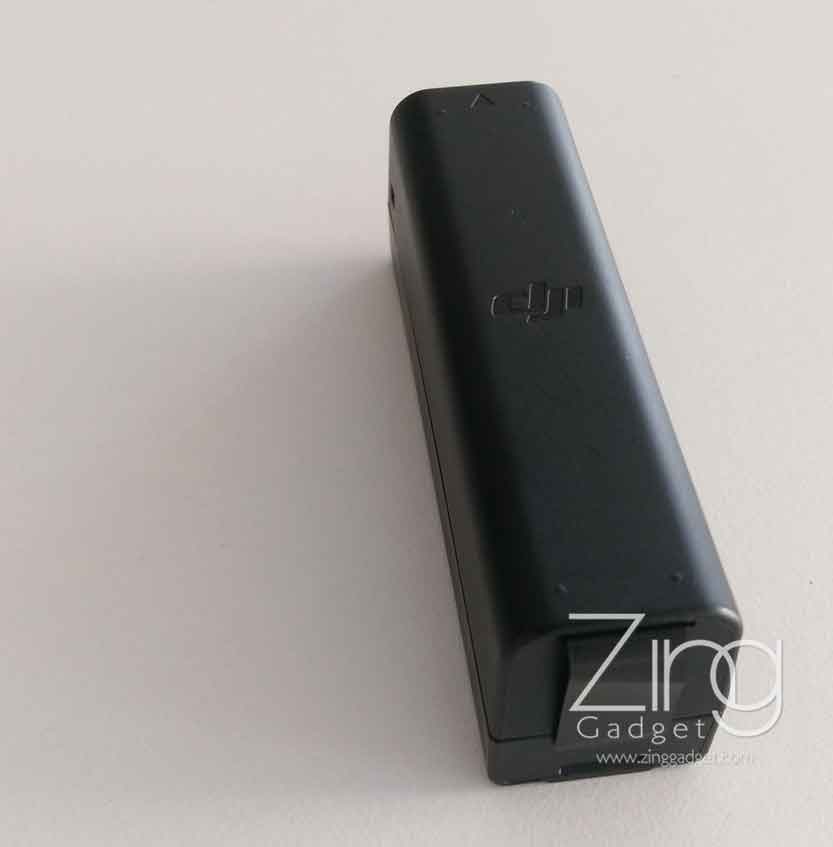 For the price of RM 2,499, the DJI Osmo proves to be worth the money – given its full integration, incredible stability, lens switching and the user friendly app which are my wow factors. A few room for improvements would be the night view and battery life – which is definitely expected if DJI plans to release a newer version of Osmo.

One for travelers as the easy-go-handy-stick makes you feel like a movie director. Again, the total control factor is my feel on this and I’ve seen many travelers tagging this along on their journey around the world.  I do not have the privilege to test this out on a sport outing, but it is worth to give it a go when you’re buying this. Given time and familiarity, you’ll take control of its stability and your new friend – the DJI Osmo will be a great competitor to all DSLRs out there.

The ZenFone 4 series has been a massive success that attracted multiple ZenFone and ASUS fans across the globe when it was unveiled early this ...