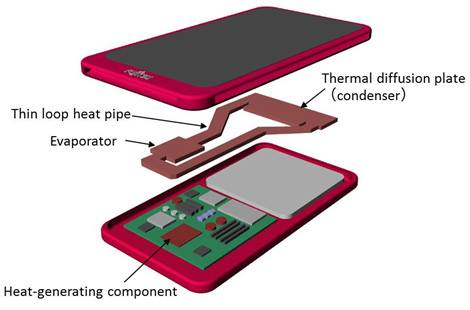 With the advancement of technology, smartphone is now equipped with faster processor to support multitasking and running CPU-intensive applications. However, heat is commonly produced as a part of the output from processor which could damage the components in long term. Furthermore, slimmer smartphones also face inefficient heat reduction due to lack of space.

Good news is, Fujitsu has developed a thin loop heat pipe which is capable of removing excessive heat produced during processor operation. A loop heat pipe consists of an evaporator that absorbs heat from the heat source and a condenser that dissipates that heat away, with the two components connected by pipes into a loop. The fluid is then encapsulated inside the loop which act as coolant to dissipates the heat. The whole thin loop heat pipe is only 1mm thick that can be easily implemented into any smartphone or compact devices for heat reduction

Advanced Micro Devices, or known as AMD has launched the new Radeon Vega Frontier Edition based on the “Vega” graphics processing unit. It is the ...