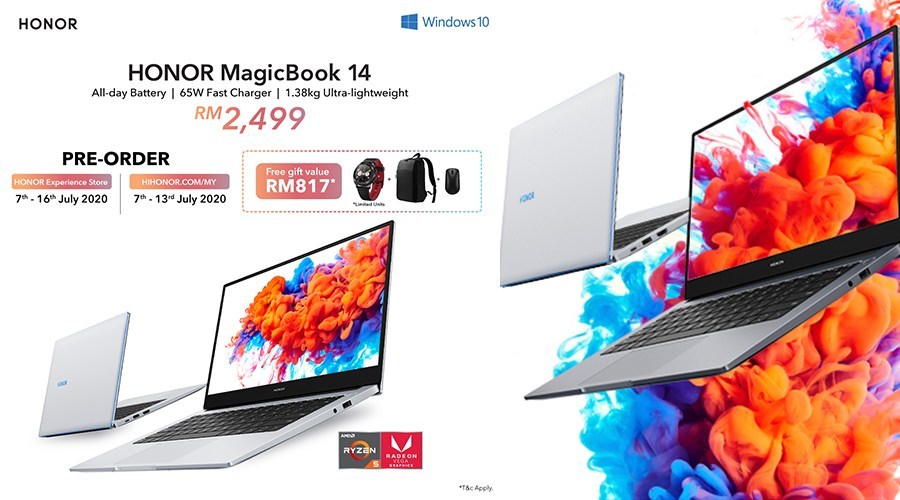 The HONOR MagicBook 14 was released on Europe as early as few months ago. The newest HONOR notebook is driven by AMD Ryzen 5-3500U processor that supports 65W quickcharging. This notebook will be open for pre-order from 6th July onward at RM2,499! Let’s dig it down to its notebook.

HONOR MagicBook 14 features 14″ FullView Display with bezel only at 4.8mm. The display is also certified by TUV for eye protection. The entire body is as thin as 15.9mm and weights at 1.59kg, making it a portable productivity machine.

HONOR MagicBook 14 also can be expanded up to 180 degree (full flat) which makes sharing screen easier. There is also a fingerprint sensor embedded into the power button which can be used authentication purposes. The camera is also hidden in a dedicated button.

As for its battery life, the HONOR MagicBook 14 is equipped with a 56Wh battery and supports 65W fast charging power, and the battery life can be up to 10 hours. Based on official measurement, it can recharge 46% in half an hour. At the same time, the 65W charger can also used for HONOR mobile phones.

As for its pricing, the HONOR MagicBook 14 retails at RM2,499 and will be available through hihonor to pre-order between 7th to 13th July. Each purchase comes with HONOR Watch Match, HONOR backpack, HONOR mouse worth at RM817.

Based on the video published by @OnLeaks, the leaked iPad Mini 4 housing appears thin in design and the stereo speaker was found on the ...