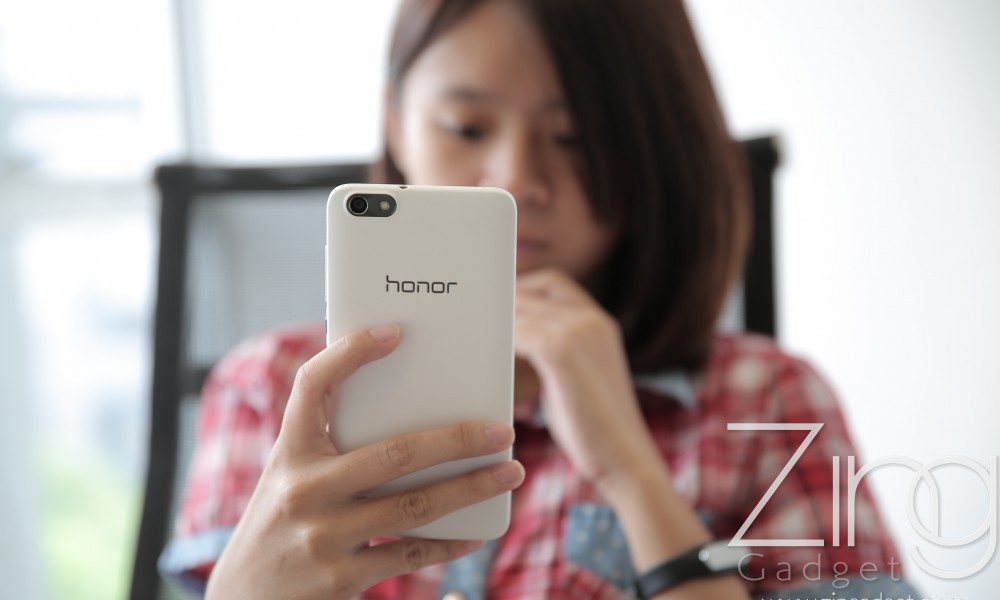 When it comes to entry-level smartphone, Xiaomi’s product could be the first that comes to mind when it comes to performance and price point. However, Huawei Honor also has another plan in producing one of the quality entry level smartphone that comes with satisfactory performance to compete against the monopoly of the market. This time, Huawei Honor has introduced the new Huawei Honor 4X which falls belong the entry level and mid-range device. How does the Honor 4X able to compete with others? Let’s see more details below!

Our review model for the Honor 4X is covered by pure white finish. There are 4 rounded edge located in each edge of the smartphone and does provide a comfortable grip and handling experience on the palm. On the bottom of the Honor 4X comes with the conventional back, home and recent apps key that come with a redesigned appearances symbolizes Material Design theme from Android AOSP. The back cover was a polycarbonate built that comes texturized. The slanted texture on the back increases the friction and thus providing a better grip while eliminating fingerprint contamination in the back.

The conventional 3 Android hardware keys are located on the bottom. Unfortunately, there is no back-lit LED beneath these button and thus users have to ‘trial and error’ when pressing these buttons in the dark.

The right side of the phone comes with the volume rocker and a power button that comes stained black. There is also a protruded area on the bottom which aids in removing the back cover of the smartphone when removing SIM cards.

3.5mm audio jack is located on the top.

Speaker grills and micro-USB port are located on the bottom along with microphone.

The camera module on the Honor 4X is slightly protruded from its body. The design of the camera on the Honor 4X appears inspired from a famous movie named “Castle in the Sky”. If you didn’t get any idea on how both are related, check out the picture below.

The big and small camera and flash module appears similar as the robot in the movie, doesn’t it? This significant resemblance is another way of honoring the director Hayao Miyazaki in the movie “Castle in the Sky”.

Beneath the textured back cover, the Honor 4X comes with 2 SIM slots that supports 4G LTE connectivity (for both!) and dual SIM standby. This definitely comes in handy for those who were bundled with seperate SIM and mobile data plan. Apart from 2 SIM slots, it also comes with a microSD expansion up to 32GB!

From our point of view, the front part of the smartphone has a common bar shaped appearance and is unattractive. However, the textured back cover provides another sense of gripping that future enhances the appearance as well as providing a better grip. Since Honor 4X features a large display, single handed operation might seems a trouble for small hand user.

With a 5.5 inches 720p display, the Honor 4X display is indeed large compared to other entry level devices. However, the overall display quality is subpar as the color does not appear as attractive as other. The contrast and color reproduction is also satisfactory but does not reached our expectation for a device at this price range.

Honor 4X allows the user to adjust the display with variety of sharpness settings based on user preference.

As seen from above, the display of the Honor 4X does not suffer from display and colour leak issue. However,  the picture quality does not appear attractive in the viewing angle around 30 to 45 degree. The color saturation and sharpness of the display is barely acceptable at this point. However for an entry level device, this display is still satisfactory.

The Honor 4X comes with a combination of 13MP rear camera and a 5MP front camera. Inside the camera application, various mode can be found inside which comes with a variety of selection based on different scenario such as panaroma, quick shutter, beautification et cetera.

The 5MP front camera is more focused towards image beautification which is helpful when comes to taking a selfie.

The camera application UI is one of the most simplest interface i have ever seen. Sliding the capture mode on top of the camera shutter button allows user to switch between different shooting modes instead of pressing one by one in the settings menu. Apart from HDR, it also comes with filter option and watermark support.

Taking a photo while deep sleep mode is not an issue for the Honor 4X. By simply double pressing the volume rocker (down), the camera application will be insta-launched and you can capture the precious moment live into your phone!

Let’s see some sample images from the Honor 4X.

In well lit and bright environment,photos taken from the Honor 4X has a good white balance and high clarity. The image also appears crisp with a balance color saturation.

In low light environment, the Honor 4X still able to takes some clear image despite there are some noise in certain section of the image.

In terms of macro shot, the details on the image does not well represented on the image. Some macroshot also produced a blurry image which is likely caused by focusing.

With large aperture at F/2.0, taking macro shots in low light environment does comes with a acceptable quality. The background blur effect was good but samples image appear little blurry with subtle noise.

Many details were lost when taken in low light environment even with flash. Those pictures also appears blurry.

While taking pictures with front camera, the image will be potrayed on the top right hand corner of the display. The image beautification comes with different level which can be adjusted manually. However, some image from the front camera taken are very blurry as some details were lost in the post-processing period.

Sporting Hisilicon Kirin 620 processor, the Honor 4X comes with an Antutu Benchmark score at 27042 which is classified as moderate.

The ‘home-made’ processor Kirin 620 processor does able to produce moderate performance when it comes to daily use. However, graphical intensive gaming could be a great burden for the Honor 4X due to the bottleneck of the low power processor.

Here are the 5 hours battery stress test on the 3000mAh Honor 4X!

5 hours of battery endurance test resulted in 61% battery consumption which is acceptable and satisfactory. One hour of single charging also can pumps in more than 35% of battery level. 8 hours of standby also consumed on 3% of the battery which is almost ideal.

One of the unique features of the EMUI 3.0 is the interchangable lock screen wallpaper! The lockscreen will change in each screen unlocks and so it surpise you in a beautiful manner! However, if you do not like this feature you can turn of this feature by swiping from the bottom to pause the wallpaper roll.

Honor 4X comes with a simple and clean interface that is highly suitable for middle-aged people or those who just want for the sake of simplicity. Nevertheless, there is no conventional app drawer when compared to normal Android phone. This means that all of the application installed are comes scattered on the home screen just like the iPhone. Luckily, you can organize those app based on the type. Dragging app to different homescreen is also a hassle process where you have to move it over each homescreen page before letting go finger from the display.

Long pressing the menu button will shows up the recent app menu. You can remove those app by swiping up from the desired app.

The EMUI also comes with a standard and a simplistic style theme. In the simplistic style theme, the homescreen will be changed into a tile format as similar as the Metro UI with large tile boxes indicated by a descriptive text and tittle on the bottom. This mode is ideal and suitable for those who has poor vision and loves large object and text such as the elders.

Since 5.5 inches is not a small display, Honor 4X has make another useful feature that allows the user to customizes a ‘halo’ floating button on the homescreen where users can easily access those hardware keys with a single hand.

In terms of fluidity, the Honor 4X runs perfectly smooth in the EMUI 3.0 interface. There was no lag observed or experienced during normal use except during graphical intensive gaming. Last but not least, there are many rooms for improvement in terms of the innovation of the software and appearance design in order to attract more consumers.

As an entry level smartphone, the Honor 4X comes with satisfactory performance at the similar price range. With such design and textured appearance, the Honor 4X could be a winner in providing a good and comfortable handling experience. However, there is much room for improvement for its processor and camera when it comes to real life task such as gaming or taking a beautiful and high quality image in different scenario. In conclusion, the Honor 4X priced at RM619 does worth alot more when focusing on the best part of this device.

Microsoft Surface Pro 7+ for Business now available in Malaysia from RM4,115; featuring 11th Intel processors and up to 1TB SSD

Microsoft has launched the new 2 in 1 hybrid tablet – the Surface Pro 7 for business. It is design for business applications and education ...