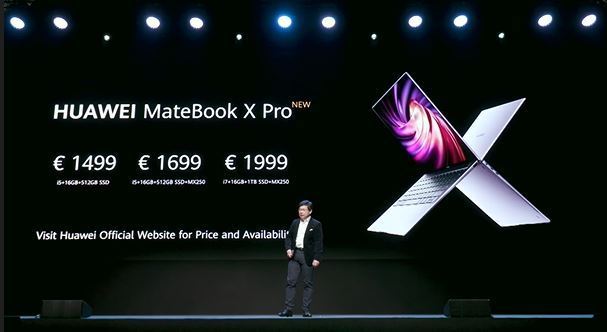 Apart from the launch of tablets and smartphones, HUAWEI also launches the HUAWEI MateBook D14/15 (the existing model) and the new MateBook X Pro!

For its design and build material, HUAWEI uses metallic alloy enforced in an unibody design with CNC processing. The total weight of this device is at 1.33kg and thickness at 14.6mm.

HUAWEI also adds the fingerprint reader into the power button which can be used for Windows Hello authentication. It also has a hidden camera in the button.

As for its functionality, the MateBook X Pro brings multiscreen multitasking in action. It has two USB C, 1x USB A and 3.5mm audio jack with mic port. HUAWEI Share is available on this device natively which syncs screen from smartphone into your laptop.

Besides, HUAWEI also adds 4quad speakers and categorized into different frequencies for the low, mids and high on music. There is total of 4 mics which has noise cancelling feature.

As for its battery, the MateBook X Pro brings a 56Whr battery and can be used for 6 hours in just 30 minutes charge. The 65W USB C charger can also be used for notebooks and tablets along with smartphone.

In the meantime, HUAWEI also launches the MateBook D 14 and D15 which offers minor improvement. The D14 and D15 offers up to 10th gen Intel Core i7 and AMD Ryzen 7 processor.

For its thermal management, these two laptops also use the Shark Fin 2.0 design, which brings 27% more effective wind power than the previous generation, with greater air volume and stronger heat dissipation. In addition, HUAWEI MateBook D 14 and HUAWEI MateBook D 15 have also adjusted the layout of the keyboard and touchpad, bringing a 26% larger touchpad area.

There is no further details on its availability yet but the HUAWEI MateBook D15 Ryzen 5 processor is now for sale in Malaysia.

Apart from the MatePad Pro 5G, HUAWEI Malaysia also announced the top range of the P series flagship – the HUAWEI P40 Pro Plus. From ...