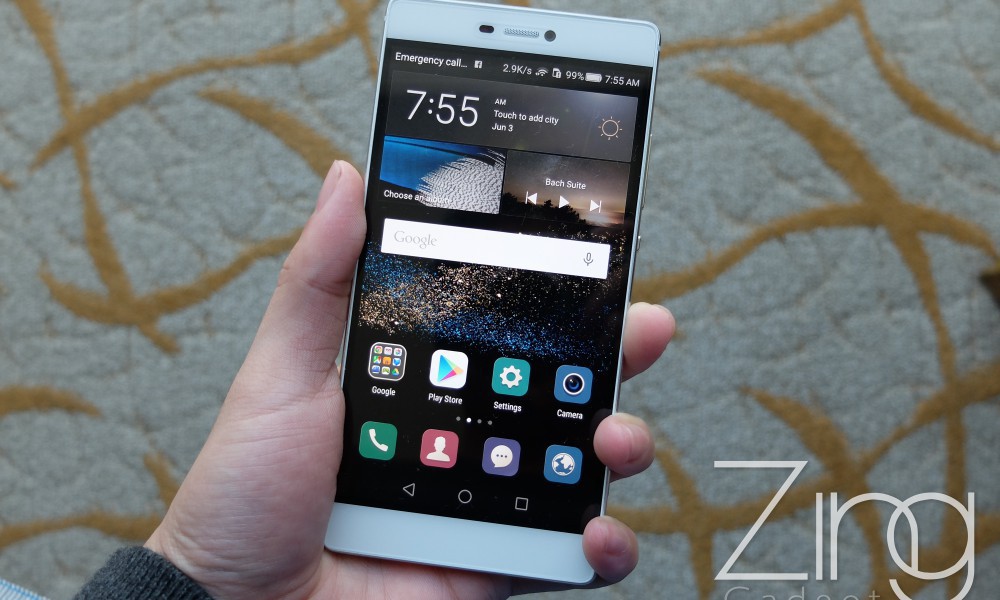 From Huwei P6 to P7, each Huawei series seeks for the true beauty design embedded into the spirit of the smartphone. Nevertheless, the new Huawei P8 also shares the identical criteria when it comes to smartphone design – to provide an extraordinary visual sensation to the public. With its newly designed body and specification, does it grabs your attention? Is this device truely worth its price? Let’s find out!

Ditching away the old dual glass design on the front and the rear, the Huawei P8 utilizes the aluminium body design that fits perfectly on its body. The Huawei P8 also provides a similar design feature from the Honor smartphone series, whereas the only difference between both flagships are the design and the Huawei Logo is removed on the bottom part of the smartphone. The main purpose of removing the logo is for the implementation of the TouchPlus glass that allows it to function as a capacitive home, back and menu keys.

Huawei P8 comes with aluminium alloy body material along with matte finish. Although it does not act as a fingerprint magnet, the grip on the back and the side still does not provide enough friction to feel safe. Nevertheless, the P8 has a comes well designed as the rear part of the body were design as flat and sharp while other manufacturer still trying to make smartphone round-edged to have a better grip. This might be one of the unique design feature from Huawei.

As a mode flagship from first quarter 2015, the Huawei P8 does not follow the 2K display trend from other flagship manufacturer. Meanwhile, Huawei uses the 5.5′ 1080p display that sastisfy the viewing experience for the general user. Under lit condition, the display is still clearly visible (no doubt). However, when the display was slanted towards a side, some part of the display appears whitish which could be due to the LCD display manufactured by JDI.

Besides, Huawei also add in some new features into the smartphone. For example, knocking on the smartphone display with your finger joint can instantly takes screenshot of your device. However, all of the practicability of this function depends on the user behavior.

Sporting the Sony IMX278 and OIS technology, the 13MP camera on the back does takes some amazing pictures. Huawei P8 is also the first smartphone camera that features the RGBW (Red, Green, Blue, White color sensor) that detects the color and enhance the precision of the reproduced image. Although this features greatly enhances the image clarity in the short run, some image does appears slightly reddish. Nevertheless, let’s see some sample pictures!

During low light shooting, the P8 uses the RGBW sensor along with the OIS. However, due to the limitation of the shutter exposure, some images does not appears as bright as others but the overall image clarity is well maintained.

Although there is some minute different between the image quality compared to some other flagship, the variety of shooting modes from the P8 does satisfy general user when it comes to photography.

Although there is some difference between the Huawei own Kirin 930 processor and other processor from Samsung and Qualcomm such as the Exynos 7420 and Snapdragon 810 processor, the Kirin 930 processor does its job perfectly and there is no lag or delayed experienced during our review period. The processor is also capable to handle major graphical intensive games without hassle. Although there isn’t much outstanding point when it comes to the mobile performance, the processor in the Huawei P8 is still excellent and satisfactory for daily use.

As most smartphone comes with larger amount of battery (around 3000mAh), the Huawei P8 only carries 2680mAh battery which is relatively small compared to others. However, we found some surprising results on the battery life when we put it onto test.

With Waze navigation for 1/2 hors, Facebook surfing for 1 hr +, Social IM with total screen lit time at 4 hours plus, the smartphone is still able to retain battery level at 13% when returning home from work. This shows the P8 does comes with efficient battery management although it is just packed with an average battery capacity.

However, if you are a poweruser, an additional powerbank is a must! The metallic design body also makes the heat more permeable towards the hand where user might experience some heat during a long period of CPU intensive usage.

One thing to note is the charging rate of the P8 is extremely slow. We managed to get 35% of the battery refueled in a single hour of charge. Without the support of quick charge technology, the P8 still loses its competitor when it comes with charging.

Although the P8 runs on Android 5.0 with EMUI 3.1, there isn’t much iconic material design theme present in the interface. Meanwhile, Huawei heavily furbished the icons and interface so the design and icons fits the Huawei EMUI 3.1 interface well.

The default theme of the Huawei P8 appears plain and simplistic. However, these theme can be user adjustable on the settings section where you can download a bunch of theme that suits your viewing and user preference. The EMUI 3.1 is also heavily improved compared to EMUI 3.0 in terms of app launching speed and the fluidity.

Apart from taking screenshot with fingerjoint, you can also locate the smartphone by yelling onto it! The Huawei P8 will automatically recognizes your voice and the name of the device and produces sound so that you can locate the device when it went missing. Although this features is new, it is unsure how practical it would be in the real life.

In the next few days, OPPO Malaysia will be unveiling their new OPPO F7 in Malaysia along with Taiwan superstar Hebe. The pricing, which is ...