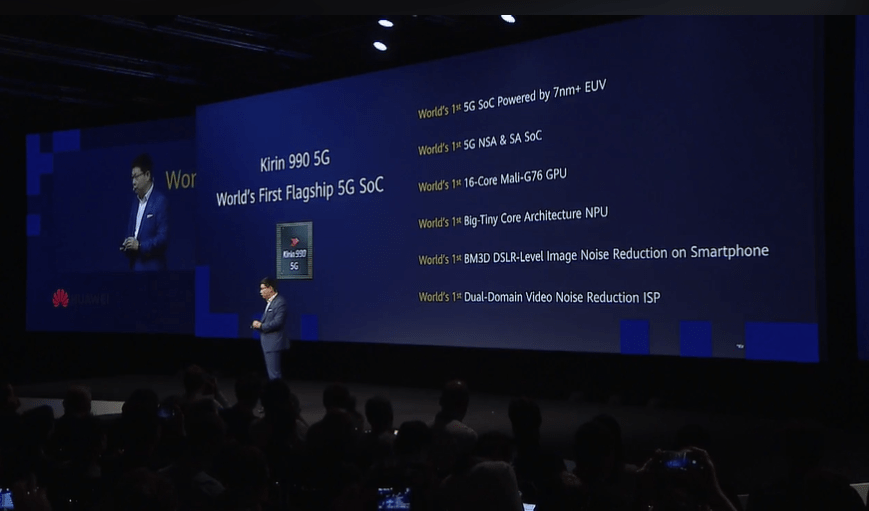 Following its tradition, Huawei has once again launched their newest Kirin update at the IFA this year. The new chip from Huawei now comes under the name Kirin 990 series which sports 7nm EUV process and supports 5G networking. It is also confirmed to be first available on Mate 30 series!

The Kirin 990 launch also marks 5 records of the world:

Architecturally, the Kirin 990 5G is built on a 7nm+ EUV process, featuring two Cortex-A76 cores, two Cortex-A76 cores and four Cortex-A55 cores in an eight-core configuration. With a new The design, the footprint is about 36% lower than the Exynos 9825 chip along with Balong 5100 Modem!

The Kirin 990 5G also integrates 5G network support and supports 5G networks with NSA and SA architectures. The download speed can reach 2.3Gbps and the upload speed can reach 1.25Gbps. At the same time, the Kirin 990 also reduces power consumption by 44% in light traffic loading, and consumes less power under the same light traffic loading. On the GPU side, the Kirin 990 is equipped with the world’s first 16-core Mali-G76 GPU image processing unit.

In terms of AI computing power, the Kirin 990 5G is equipped with the NPU neural processing unit of Huawei’s self-developed DaVinci architecture, and adopts the new “Big-Tiny Core” size core architecture, which can be adopted for the size of the processing items. Different sizes of cores are processed to avoid the situation of “big core use” and provide better AI power for Kirin 990 5G.

Thanks to the powerful AI computing power, the Kirin 990 5G can support real-time video mapping technology, which can map the characters in the video in real time, and delete, enlarge, and blur the background at will.

In addition, Huawei also released another chip for wearable devices: Kirin A1, which is 5% smaller than Apple’s H1 chip, which means it is easier to be placed in wearable devices such as wireless headphones. At the same time, Kirin A1 also supports Bluetooth synchronous dual channel connection, which can make headphones achieve more stable and reduces power consumption.

With the Mate 30 series coming out soon, we can expect the Kirin 990 will be first available over there! Stay tuned!

With of one of the widest coverage of supermarket and shopping centers across west part of Malaysia, AEON has launched their e-wallet app known as ...