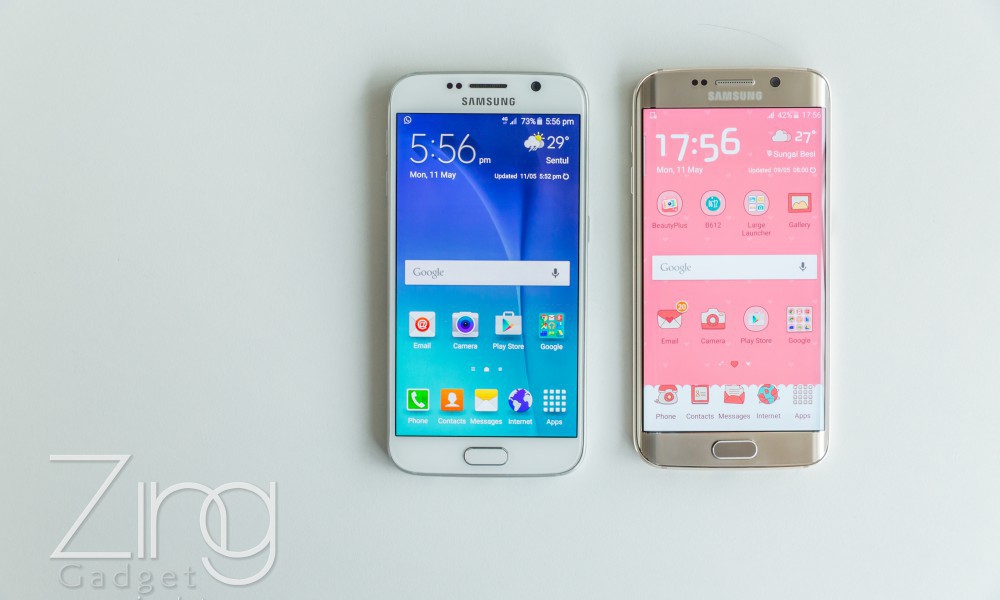 Last year was a tough year for Samsung after its sales has fallen dramatically compared to last few year after the release of Samsung Galaxy S5. However, Samsung has not given up on the Samsung Galaxy flaghsip series and promises to renovate their design and performance on the next upcoming Galaxy series. Hence, the Samsung Galaxy S6 and S6 Edge was then born with a distinctive design and one of the world first device that features a 3 sided curve display and packs with high performance hardware. Let’s open it up and and investigate more!

Our review models are the white colored Samsung Galaxy S6 and the gold Galaxy S6 Edge. Finally, Samsung finally ditched its conservative plastic material in the back cover build and uses glass as the main build material of the smartphone. The main chassis on the side comes with metalllic finish which makes the whole device appears more premium. The implementation of dual curved display built onto the S6 Edge once shown the great of the Samsung in innovation and design. This makes its brother, the Galaxy S6 uncomparable when placed side by side.

The Samsung Galaxy S6 still retains the similar candy bar design of the predecessor on the Galaxy S series. One of design change on the S6 is the edge is the chassis appear more round which gave a better handling experience for user. The home button on the S6 and S6 is also slightly protruded compared to their previous version. This is because the S6 now implements the fingerprint sensor that requires touch instead of sliding finger. It is a good improvement because the fingerprint sensor are now more responsive and precise.

With the thickness at 7mm (S6) and 6.8mm (S6 Edge), the power button and SIM slot are located on the right side of the device while the volume rocker is located on the left side. The chassis design does appears absolutely amazing with added thickness to minimizes the chance of screen cracks during accident.

The S6 Edge, on the other hand comes with a 3 side curved display which indeed appear distinctive and unique. However, sacrifices has to be made when it comes to ‘thicker’ display which is the chassis dimension has to reduced to a great extend to avoid increasing phone thickness. These changes eventually makes the edge felt more sharper since it comes with thinner chassis. Meanwhile, since S6 uses conventional display, the round edge does not cause any uncomfortable for long period of use.

Due to the slim chassis, the SIM slot was ported to the top on the S6 Edge.

The rear panel of the S6 and S6 Edge uses the 2.5 glass panel along with a protruding camera module in the top-middle of the device. Meanwhile, the heartbeat sensor and the flashlight were located beside the camera lens. The gold colored S6 Edge does look elegant but it is a fingerprint magnet!

The MicroUSB port, noise cancellation microphone and the speaker grill are located beneath the phone. Does it looks similar as Apple iPhone 6?

The S6 is one of the most conservative phone in terms of design out there. Without the curved edge display, the S6 provides one of the most comfortable handling ever and single handed operation comes easy. The use of glass and metallic finish as their main build material also greatly enhanced the appearance of the smartphone in many ways.

Meanwhile, the dual curved display on the S6 Edge enhanced the uniqueness of the smartphone to great extend. While looking from far, the S6 Edge able to distinct itself from other smartphones. However, when it comes to screen protection, the Samsung Galaxy S6 Edge comes with Corning Gorilla Glass 4. Since it is a known fact that the Gorrilla glass could shatter when fall from a great height, does the S6 Edge requires additional screen protection? However, the addition of screen protector could greatly affect the aesthetic of the device, which makes this an frustrating problem for some user.

The S6 Edge curved display does packs with extra functionalities such as a short favourite contact list for instant calling. The curved edge also provides some unique display experience when it comes to movie and videos enjoyment where the image was displayed with a slight 3D experience.

The curved display in the S6 Edge is indeed one of the most unique out there. However, the curved display also caused unnecessary issues such as light refraction and mis-press. Some button which are located around the edge also could be harder to press since it requires a much more precise clicking.

The SuperAMOLED display in the S6 and S6 edge does provide some breathtaking display experience. It is one of the best display in the flagship market which does comes with better color reproduction and high detail display.

The Samsung Galaxy S6 and S6 Edge comes with 16 megapixel camera with Sony IMX240 module. With large aperture at f/1.9 and optical image stabilization, Samsung promises that this camera can takes impressive image quality even when taken from scratch. Let’s see how does the camera performs!

The camera applicaiton interface in the default mode are simplistic which does not provides as many complicated option for scenery selection. Those advance camera user might want to choose ‘Pro’ option when taking the best picture of the scenery from the powerful camera.

The photo taken on bright environement on the S6 and S6 Edge are beautiful! The color reproduction and white balance are accurate and the colors appear natural.

In night shooting, the camera still able to retain as many detail possible in those picture. Both camera are indeed great in taking pictures in low light environment. However, if you insist on looking for critics on camera quality, we suggest that Samsung could reduce the amount of noise when taking low light photos.

The color reproduction of these details on the food are great. There isnt any over saturation of color in the pictures taken above. (Damn i’m hungry right now)

The macro shots are amazing!

The color reproduction of the S6 and S6 Edge no longer suffers from over saturation like their previous camera. Whether taking pictures in bright, dark environment or even taken human potraits, the Galaxy S6 and S6 Edge does able to retain high amount of detail and the colors of the human face do appears more vivid. Some of the sample pictures taken from the S6 does perform better from pictures taken from an Apple iPhone 6. Looks like there will be strong competition going around the corner!

The rear camera does take high quality image, while the front does provides impressive shots! Looks like Samsung has been making some major improvement on their camera interface and usability!

When it comes to processor, Samsung always ditched those high performance mobile processor that other smartphone manufacturer are using. However, Samsung Exynos processor are known to suffer from slow performance issue after a extensive period of time. This time, Samsung revolutionizes its own processor with the new 14nm process. The S6 and S6 Edge are both equipped with Exynos 7420 and comes with high memory bandwidth Mali-T760 MP8 image processor which are currently the best out of all mobile processor in the market.

Instead of using 4GB RAM like the Asus Zenfone 2, Samsung Galaxy S6 and S6 Edge are only packed with 3GB RAM. However, the 3GB RAM packed are belongs to LPDDR4 grade which performs significantly faster than DDR3 RAM used in common smartphone. Hence. this boosts the multitasking abilities and the performance of the S6 and S6 Edge.

Packed with high performance hardware, the S6 and S6 Edge currently outperform other smartphone. The user experience is much fluid compared to the previous Galaxy S5 and S4. This time, Samsung didnt faced any over heating issue when intensive computing application was running on the background. The only time that these smartphone overheat is when the camera application was launched for a long period of time, which usually occurs when the home button is misclicked or during extensive video recording sessions.

84% of battery were drained in 5 hr of consecutive battery test. Smartphone standby for 8 hour also drained 5% overall. Based on the battery test result conducted above, the battery performance of the S6 and S6 Edge belongs to sub-par which is barely sufficient to be used daily. Hence, you might need to charge this phone twice a day if you are a power user.

Luckily, the S6 and S6 Edge supports quickcharge technology which Samsung stated that both phone is able to use for 4 hours after 10 minutes charge. Our testing show that 26% battery was charged in 15 minutes and it took 1 hour and 20 minutes to full charge a smartphone. This result is sastifactory yet good which solves part of the battery endurance issues.

Running the latest Android, the Samsung Galaxy S6 and S6 Edge does comes with the latest firmware modified from the original Android 5.0.2. The new TouchWiz UI now appear more cleaner and simplistic and does perform much better compared to the old, slugginess TouchWiz UI that everyone hates. The new design features the concept idea from the Material design on the Google Android Lollipop which does looks pretty elegant.

This is the new lockscreen and home interface of the TouchWiz UI. Ditching the previous colorful looks, the new default wallpaper appears clean and simplistic yet beautiful.

Did anyone noticed something different? Yes! Samsung has greatly reduced the amount of bloatware installed on this device. One of the application that come pre-installed – Smart Manager is a great tool to manage your phone settings.

The new TouchWiz does appears more clean and simplistic. Much better than before.

Good news is, the new TouchWiz UI also comes with the option to change theme! So if you get bored of your old TouchWiz UI, you can download and install new theme from the theme store to your preferred one!

After a month of vigorous testing, we didnt encounter any slow or delayed response on the TouchWiz UI. This is indeed one of the greatest improvement for the new Samsung Galaxy S6 and S6 Edge.

Honestly, this is one of the greatest device from the Samsung Galaxy S Series. Samsung has been making effort in making a uniquely design smartphone that attracts hearts of the consumers. The hardware packed within this beast is a high performer which outbeat some of the major flagship out there. The software is now greatly improved from its old slugginess style which now provides an enhanced user experience. With great expectation on mind, we hope that Samsung will continue to strive for their new best during each release of flagship every year that greatly benefits us in our lifestyle.

Recently realme has hinted an upcoming “Koi” phone along with some specification and design. The realme Koi could be named as realme V15 and it ...