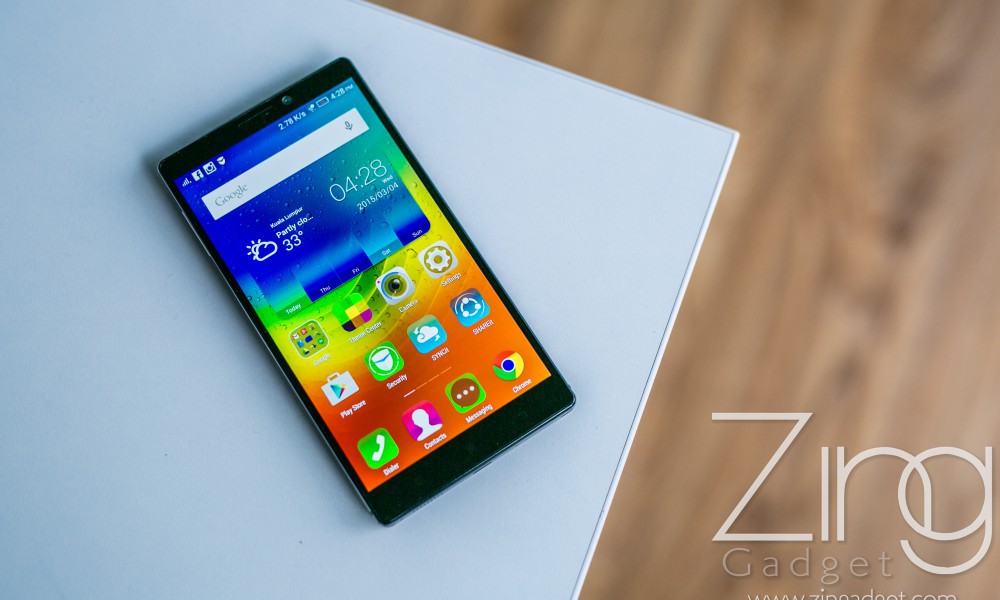 Smartphone industry has always been competitive as each smartphone manufacturer demonstrate their technological advancement in developing high performance devices apart from dialing and texting between friends and family. With the release of high performance flagship such as the Apple’s iPhone and the Samsung GALAXY S Series, smartphone manufacturer has started to invest time and money in developing innovative products in order to gain a foothold in mobile arena.

One of the major smartphone manufacturer in China, Lenovo also offers devices ranged from entry-level devices to flagship series smartphone. This time, Lenovo introduced their best flagship – Lenovo Vibe Z2 Pro that is equipped with the highest performance specification and priced at RM2299 that is highest among other China smartphone. In the end, the following review will assess whether Lenovo Vibe Z2 Pro is able stand out from other competitors

The front of the Lenovo Vibe Z2 Pro is packed with 6 inches 2K IPS display with body dimension at 156 x 81.3 x 7.7 mm. The 6 inches smartphone appears a long and large bar shaped but sleek in design. In low light environment, the Vibe Z2 Pro display appears dark black when the display is turned off. There is also 3 virtual buttons beneath the display indicates the back, home and the menu buttons. The bezels of the smartphone is only 1.5mm thick that makes the display appears large and fascinating from its compact design.

The backside of the Lenovo Vibe Z2 Pro is made up of metal with cloth-like textures that appears elegant. This texture design makes the Vibe Z2 Pro suitable for gentleman to use as business smartphones. However, the protruding camera module and the black acrylic part diminishes the elegant design of the smartphone. Besides, the black acrylic part around the camera appears reflective and does attract fingerprint that can affects overall appearance after long usage.

Vibe Z2 pro is only 7.7mm thick with improved side design for handling experience. However, the volume rocker on the left is slightly higher that makes it harder to press with small hand. The right side of the smartphone is equipped with SIM card slots and power button. You may note that the screen appears slightly smaller than the body chassis which is a precaution of damage/cracks on display when accidentally fall of to the ground.

The upper body part of the device comes with 3.5mm earphone jack and the bottom part contains microUSB slot and noise-cancellation microphone. The design of the bottom and upper frame appears sharp that become uncomfortable when hold horizontally.

Lenovo Vibe Z2 Pro is a devices crafted to flagship level and equipped with 6 inches 2K display at 2560×1440 resolution. The display also features LTPS + IPS technology and Phosphor Display Engine with pixel density up to 490ppi. With such beautiful display quality and thin bezel, it makes the viewing experience even more fascinating and distinct from other smartphones.

The 6 inches 2K display of the Vibe Z2 Pro is brighter compared to Full HD display on the Oppo N3. Statistic sources also shows that the Vibe Z2 Pro display can reaches up to 630nit. The comparison also shows that although Oppo N3 has lower luminance, but it is more original in terms of colour reproduction in low light condition compared to Lenovo.

Let’s see how does the display of the Lenovo performs compares to other smartphone. The right smartphone is Oppo N3 that features 5.5 inches LTPS display (403ppi).

Based on the images above, Vibe Z2 Pro display appears more warmth after its display software optimization compared to Oppo N3. In terms of saturation and colour reproduction, Oppo N3 does perform slightly better than Vibe Z2 Pro. Nevertheless, the Vibe Z2 Pro features a display that focus on luminance and fine details which is useful in bright environment.

Lastly, Lenovo Vibe Z2 Pro offers wide angle high clarity display and does not suffers from display issues like some other smartphones. This display correlates with the flagship status of this smartphone and satisfactory yet appealing to users. With such high luminance display, there shouldn’t has any issue when using this smartphone under sunlight.

With such protruding camera module, we wonder what could be packed beneath the camera lens. The main camera on the Vibe Z2 Pro is a 16MP snapper equipped with optical image stabilization. It also has large aperture up to F/2.2 and supports 4K video recording. Lenovo also stated the camera is equipped with dual RGB sensor that is capable in detecting light and color automates scene recognition system.

Apart from the amazing specifications, Lenovo also added a clean user interface to its camera app. The default mode of shooting is the Smart Camera that can detect the scene and capture optimized picture.

If the Smart Camera mode is insufficient, the camera app also comes with advanced mode where users can alters the aperture, ISO, shutter speed, EV and other settings. There is also several mode selection such as Artistic HDR, Quick capture, Panaroma, Trajectory etc.

The Advanced/Professional mode is allow user to manually adjust the settings by toggling the camera shutter button.

You can also observe the change in image quality when each settings is toggled manually.

Lets see some sample pictures captured from the 16MP camera

In terms of macro-shot, the background blurring is not strong as expected. However, the pictures taken shows high clarity with well white-balance as well as able to reproduce the original colour of the food.

In well-lit environment, the Vibe Z3 Pro captures decent images (You can observe bus stop sign on the back) that shows the capability of the 16MP camera. However, we noted that there is purple fringing occurs at the edge which affect the overall picture quality.

From the picture above, we find that Vibe Z2 Pro is over-sensitive towards red and green colour that cause the whole image appears slightly oversaturated.

In this comparison, we bring the 16MP Oppo N3 into test. The following pictures are photo captured by Vibe Z2 Pro and Oppo N3 under default capture mode.

In the low light shooting above, the image from Vibe Z2 Pro is slightly less bright compared than the image from Oppo N3. The Oppo N3 is able to preserve the details but suffer from high amount of noise in the image.

The image taken from Vibe Z2 Pro under sunlight appear slightly red while Oppo N3 is more warmth. After enlarging, both images taken from each camera appears clear. It is obvious that there is difference in the post-processing that suits different user styles.

Lastly, the Lenovo Vibe Z2 Pro camera is satisfactory for common use. One of the good thing about the camera is the short focus time and high shutter speed that can capture image in short period of time. However, the automated scene recognition mode can be incorrect at certain environments. Thus, there is several room of improvements for the 16MP rear snapper.

The Vibe Z2 Pro front facing camera comes with beatification that is likely to be useful when taking selfies. It also comes with other shooting mode and different methods for activating the shutter.

Based on the selfies above, we can conclude that the front facing camera does perform well in capturing beauty shot and selfies.

The Lenovo Vibe Z2 Pro is powered by Qualcomm Snapdragon 801 Quad Core SoC clocked at 2.5 Ghz. It also comes with 3GB RAM and 32GB internal memory that is sufficient in running today applications. Let’s see the Antutu Benchmark result of this device!

With those specification, Lenovo Vibe Z2 Pro has no issues running any graphic intensive application and games. Besides, there is no lagging occurs during our intensive testing thus power user shouldn’t be worried about the performance of this smartphone.

One thing to note is that long period of usage will cause the heat to concentrate at the metal back cover. However, the heat can dissipates out quickly from the device.

One of the common problem suffered from high performance smartphone is the battery life. However, this time Lenovo packed 4000mAh battery into the Vibe Z2 Pro is sufficient to supply the power-hungry Snapdragon processor. We performed our test on the battery consumption for different application and activity on this device:-

The Vibe Z2 Pro still have 68% battery left after 5 hours of running intensive application and activity. Besides, only 3% of battery were consumed during 8 hours of standby period. One of the good thing is, the Vibe Z2 Pro original charger with output 5.2V-2A able to replenish 50% of battery in an hour.

Vibe Z2 Pro also comes with pre-installed battery saving application. Users can remove the background application or high-RAM activities from the Power Manager application and squeeze out every bits of battery.

The Vibe UI 2.0 status bar that contains a list of essential settings required for daily use. Overall the status bar menu appear clean and sleek with no extra gimmicky features.

If you are not fond towards the colourful Vibe 2.0 UI, you also have the option to change to your favorites theme in the Theme Center. Apart from changing theme, boot animation can also be changed in the Theme center. However keep in mind that there are only limited boot animation and theme available in the market currently.

In conclusion, the function of Lenovo Vibe UI 2.0 is satisfactory for common use it does not require complex operation to able to utilize the phone. There is no issues on the user experience after we tested for several days. Since Lenovo products are design and marketed mostly in China, the design and the UI appears slightly different from other Android smartphone (AOSP). For an example, the classic App drawer was removed from the Lenovo system and other factory security application and browser also come pre-installed. Some of the pre-installed application can be considered as bloatware since it is unable to uninstall or to shut off. Although Lenovo Vibe Z2 Pro comes with 3GB of RAM, there is only 900MB RAM available in idling stage. This could be due to those pre-installed bloatware taking up RAM space and computing power from processor. Thus, there is certain lots of improvement can be done on the software and user interface.

The Vibe Z2 Pro is one of the smartphone that Lenovo has been investing efforts in its development. However, the smartphone priced at RM 2299 does not provides similar satisfaction when comparing other smartphone flagship around this price tag. There isn’t much innovative features from its previous generation aparts from better specification. Lastly, we hope that Lenovo can put in more effort in developing more innovation features in its upcoming product in 2015.

Earlier today Google has officially announced the launch of Android N for new Android smartphones. Soon after their announcement, HTC has make a swift announcement ...