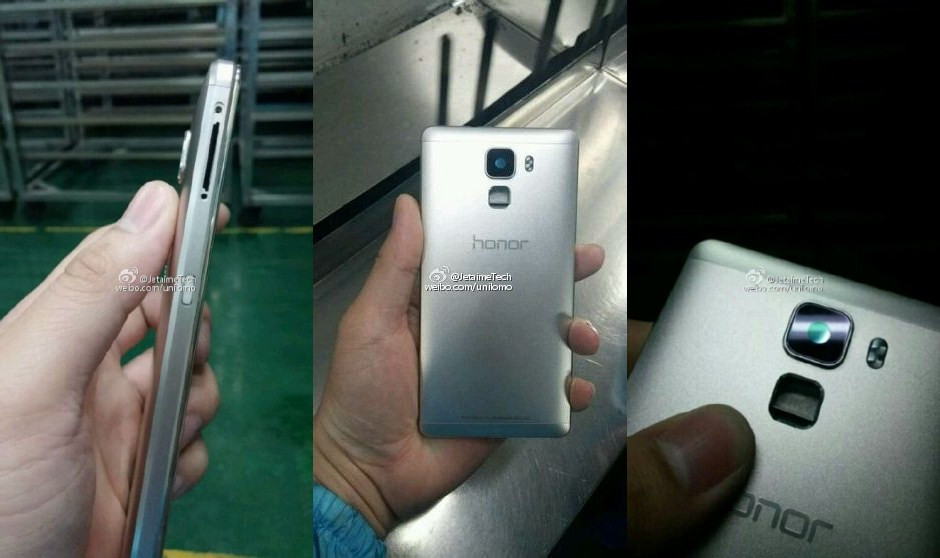 Honor 7 coming soon? A circulated Weibo source has shown some leaked image of the a device named as Honor 7 which shows the metallic body design. Apart from the design of the Honor  7 leaked online, the specifications as well as the price also has been leaked by the same user on Weibo few days ago.

It seems like phone manufactuer today has joined the metallic design revolution. This device appears similar as the Huawei Ascend Mate while the SIM slot is located on the top left of the device. There is an unknown button located beneath the SIM slot which is could be the power button. Nevertheless, the button placement and the design of this upcoming ‘Honor 7’ does not appears similar as its predecessor – Honor 6.

Nevertheless. source also stated that there will 2 different variant for this Honor 7. The premium variant comes with a 5 inches Full HD display, Kirin 935 processor and 4GB RAM + 64GB storage and 13MP rear camera along with 3280mAh battery. The standard and economical variants comes with a 3GB RAM and 16GB of total internal storage.

The Honor 7 is stated to be priced at RMB 2699 and the standard version is priced at RMB 1999. There is also other hearsay that Huawei is planning to announce the Honor 7 Plus which comes with a Kirin 950 processor. However, it is a known fact that Huawei will only manufactures the Kirin 950 on the upcoming July to August and thus we might have to wait for some period for the Honor 7 Plus to surface on the internet.

Qualcomm Snapdragon 710 has been a long player in mid-range smartphone including OPPO R17 Pro and Nokia 8.1. After these years, Qualcomm has updated their ...