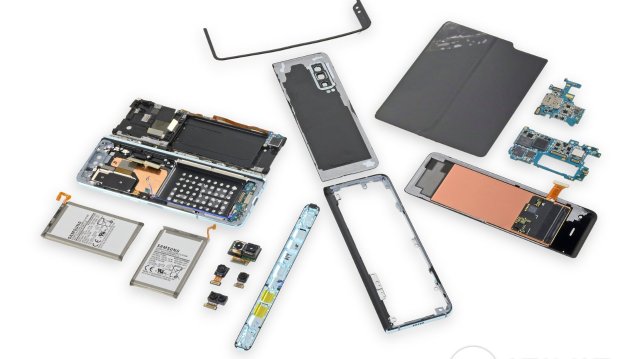 iFixit is back again with another disassembly video and it is the Samsung Galaxy Fold! Let’s have a look on iFixit experts teardown process on the Samsung newest foldable smartphone.

iFixit stated that the Galaxy Fold does appears much thicker than usual due to the folding edge. With a thickness at around 2cm, it will protrude when placed into a pocket.

On the first teardown, we can observe the antenna and wireless charging module, followed by battery and camera.

On the other side of the display is the Samsung S6Sy761X chip. The smaller displays and flat edge makes disassembly process slightly harder.

There are a lot of gums on the battery which held the battery in place. Both battery varies in design and the capacity as the longer one holding 2135mAh battery while the shorter but wider holds 2245mAh.

Here comes a set of camera module from the Galaxy Fold.

Here we have the mainboard from the left and right panel, RAM, storage space and other micro components in place.

Without the external frame, the disassembly process gets much more quicker and easier.

Here is both board folding in action! It is folded and held in place with a central spine pillar which hold both pieces in pace.

As Samsung claims that the Galaxy Fold and endure up to 200,000 times fold and unfold action, iFixit commented that this is a factory test result from a machines while user behavior could varies across different person. The folding bezels on the edge also poses several risk as dust could go in.

Lastly, iFixit also rated the repairability score at 2 (max 10). This is because there are a lot of glues which held the frame and some other components in place. Tearing it out could potentially damages these equipment and render device unusable.

Learn more about the disassembly process from iFixit here.

Qualcomm collaborates with Samsung for Snapdragon 845

With the growing numbers of devices running Snapdragon 835 processor today, Qualcomm has started its research and development for a newer chip for the future ...