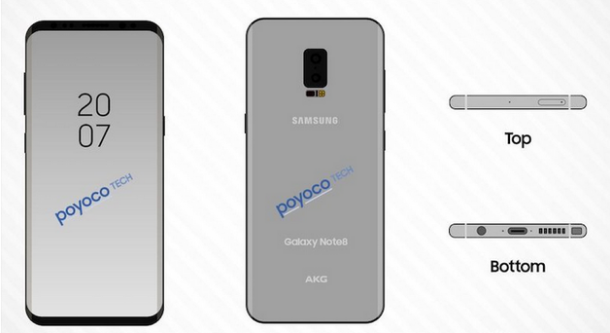 Soon after the Galaxy S8, many Samsung fans has shifted their focus on the Samsung next biggest release, the Samsung Galaxy Note 8. Recently, someone had just leaked the Galaxy Note 8 design concept and shows that it follows the S8’s iconic Infinity Display and audio by AKG.

As seen on the concept leak above, there isn’t any fingerprint sensor embedded in the rear panel as seen on S8. Samsung could like be migrating its fingerprint sensor beneath the display utilizing ultrasonic fingerprint detection technology. Besides, its audio system will be powered and enhanced by AKG, a world renown audio device manufacturer.

While the concept leaks has no complete authenticity, all finals will be revealed during the Galaxy Note 8 launch, happening at IFA on September this year.

Great performance with only RM899! Buy Y9 Prime 2019 and win a Mercedes in HUAWEI Carnival!