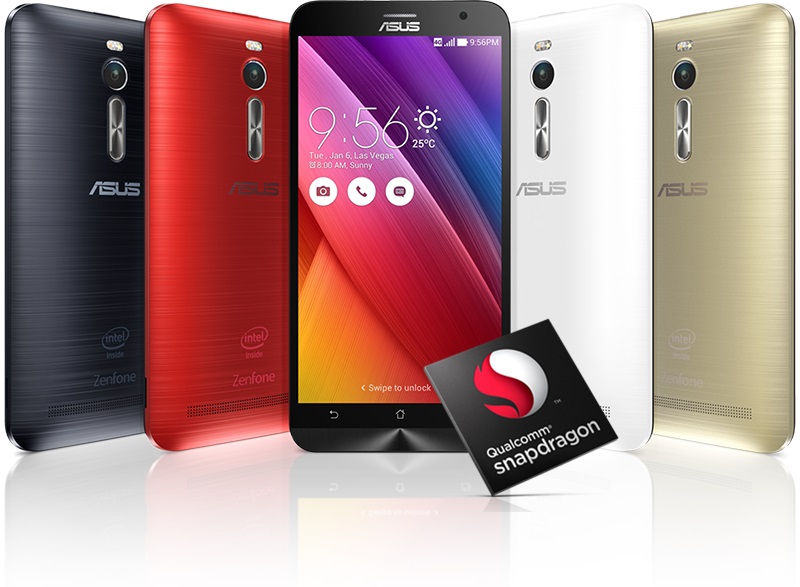 Within 2 months, Asus has released 2 different smartphone model of the Zenfone series, namely the Zenfone 2 and the new Zenfone Selfie. The Zenfone series was first known for its high affordability along with good performance from the Intel Atom processor. However, there has been complains on the compatibility of Intel processor in Android development while Asus also stated that they are facing difficulties when planning firmware upgrade for previous Zenfone such as the Zenfone 5 and 6.

After the release of the Asus Zenfone 2 in the last 2 months that receive applaud for the first to breakthrough the amount of RAM installed into a device, some users complain that Intel Atom processors in the Zenfone 2 could sometimes overheat during computing intensive activity. Meanwhile, Asus also stated that there will be a large display variant of the Zenfone 2 will surface the market soon that will be coming powered by 64bit Qualcomm Snapdragon processor.

The newer Zenfone 2 will sports a 6 inches display along with Qualcomm processor. Camera wise the Zenfone 2 will still manufactured with the 13MP camera and features laser focus technology which further enhance the camera experience. As seen on image, the new Zenfone variant will be slightly larger than the original Zenfone 2.

Here’s our point of view :-

Asus is likely one of the first few smartphone manufacturer that uses Intel processor as their SoC in smartphones. However, not everyone on the market has a higher tendency to prefer Intel processor built onto their devices which is largely due to compatibility issues (and future upgrade issues). Although Qualcomm processor was not the ideal nor the perfect one (since it also reported overheating in some), it is likely that Asus is now making a good choice to produce more variant for the consumer to choose from. Whether or not you like the Intel or the Qualcomm processor, you can still get a Zenfone 2 that favourites your user preference.

If you already own a Zenfone 2, Dont be sad because:-

Does the new Qualcomm powered Zenfone 2 supports Asus boostMaster technology or Quick Charge 2.0? Which one is the most efficient?

When will it come to Malaysia?

Qualcomm Snapdragon processor aren’t perfect too! (As stated on above) There are several reports that shows the device overheats under benchmark and stress test that worsen the user experience! Although the new Zenfone 2 could be powered by Snapdragon 615 processor, the performance of it might not provide fluid experience when running apps on the Zenfone. Meanwhile the higher flagship variant, Snapdragon 810 suffers from overheating issue too.

be it as Intel or Qualcomm, let’s just find the ideal Zenfone that suits us!