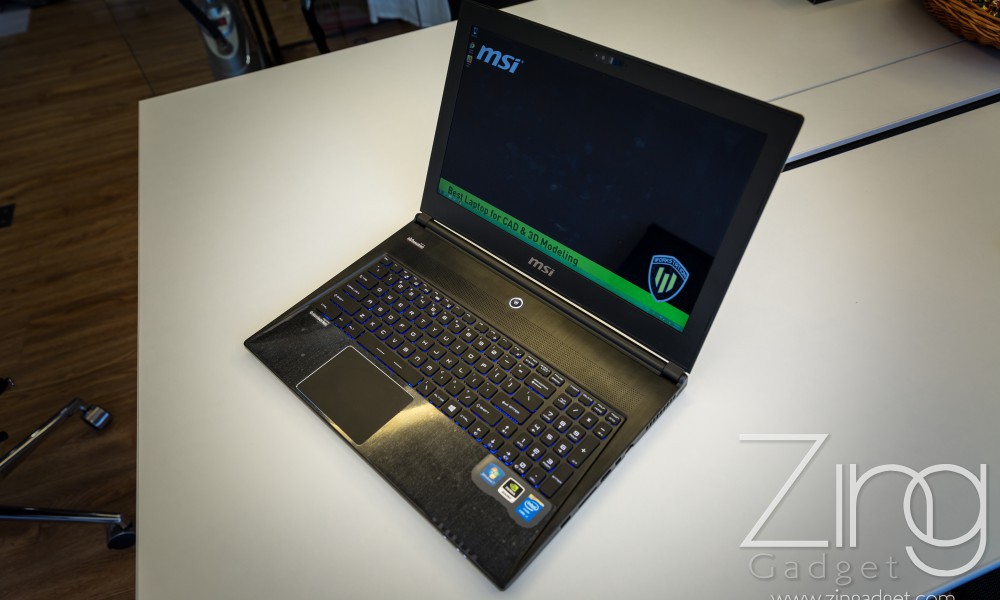 The MSI WS60 uses the similar casing from the gaming  notebook MSI GS60. The lid casing features glossy metallic textured surface and the display is equipped with 3K LED display with wide viewing angle up to 178 degree. It also comes with an option of Full HD display that has anti-reflective screen which is ideal in working outside.

All cable ports are found in the side of the laptop. These includes AC adapter port, 2 USB 3.0 port, one microphone and headphone jack on the left side of the mobile workstation. Whereas thunderbolt 2, HDMI and a SD slot and USB 3.0 slot was found in right side of the the laptop. The Thunderbolt 2.0 is likely to be used for fast storage or as a mini DisplayPort. Nevertheless, HDMI output could be a necessity if this mobile workstation requires larger display.

In terms of their keyboard material, MSI uses plastic finish on their palm rest. The palm rest is sort of firm and the plastic materials provides certain level of heat insulation from hand when the device is under load.

Specification wise, the MSI WS60 is powered by Intel Core i7 4710HQ with Nvidia K2100M 2GB GDDR5 mobile graphics.The processor and mobile graphics card is likely to produce beefy performance for intensive computing from the workstation. It also packed with 16GB DDR3 RAM, 256GB Raid 0 SSD and 1TB HDD 7200rpm that makes mutlitasking no longer an issue. The laptop also runs on Microsft Windows 7 64bit where architecture software such as AutoCAD and media software from Adobe is compatible with the ecosystem.

The Intel Core i7 4710HQ is undoubtedly one of the the best mobile processor that is used in gaming and mobile workstation. With highest clock rate at 3.5Ghz, it should runs majority of software and games without hassle.

MSI WS60 is also packed with Nvidia Quadro K2100M that is specifically designed for architecture and design. Comparing with consumer grade graphics card, the workstation graphics should belongs to the mid range level of all cards. The Kepler-based engineering-grade graphics card is ideal for modelling and rendering complex structure and with accurate reproduction of line. Although the latest Nvidia mobile workstation card has reached the K5100M, the K2100M still can handle different tasks such as Adobe Photoshop and other video rendering process. Here are the list of graphics chip benchmark results from 3DMark and PC Mark.

The MSI WS60 can handle the loads and graphics effect from the Far Cry 4 Gold Edition when all of the settings were set to minimum. The frame rate  was around 20-30 fps (frame-per-seconds) and the temperature of the CPU and GPU are around 50 to 60 °C.

Now, let’s test the Assasin’s Creed Unity on the WS60.

Turns out WS60 has some issue when rendering the Assassin’s Creed Unity. With all the settings were adjusted to minimal, the game barely runs on 10 to 20 fps which is almost unacceptable for gaming. The temperature also increases to 60-70°C when under load. Looks like WS60 is going to have a hard time playing modern tittles.

In terms of thermal control, the daily usage on the WS60 bring no harm as the temperature were kept intact around safety range. This excellent thermal dissipation can be likely credited to the dual fan system in the laptop. However, many WS60 users also reported that the fan is making loud noises when the system is under heavy load.

As a part of MSI products, the keyboard was specifically designed by professional hardware manufacturer – SteelSeries. SteelSeries products are well known for its quality and the keyboard is expected to last longer than conventional manufacturer’s keyboards. The keyboard also comes with anti-ghosting features where there is no delay or double pressing during fast input. The MSI also packs with Keyboard LED Manager so that users can change the keyboard lit colours based on their personal preference. It is also noted that the Windows key was placed on the right hand corner to avoid disturbancce during gaming.

The MSI WS60 features Thunderbolt 2 slot on the right side of the laptop that provides fast storage solution as well as 3D and 4K output. With the read/write speed around 20Gbps, file transferring via thunderbolt shouldn’t be an issue.

Conventional laptop commonly uses single fan to dissipates the heat from different computer compartments. However, MSI WS60 uses dual fan cooling system where both fan dissipates heat generated from different compartments. For example, the left fan on the rear panel is responsible to remove heat carried from GPU whereas the right fan is responsible to dissipates heat from the i7 CPU. However, the fan does generates lot of noise when intensive cooling is required as the processor and GPU is under heavy load.

In terms of the display, MSI WS60 uses 3K LED backlit display that could be a selling point for the some consumers. However, we found that 3K display is probably a gimmick since most of the highest videos and movies quality are around Full HD. Besides, with the resolution at 2880 x 1620 pixels, we can barely read the text displayed in the screen. Thus it is encouraged that users may wish to lower down the display to 1920 x 1080 if they faced distress when staring at the screen for long time.

MSI WS60 is one of the slimmest mobile workstation in the market that features elegant design as well as powerful performance. The brushed metal design and Steelseries LED keyboard can provides fascinating visual feast for the users. With the thickness at 19.0mm and weights around 1.9KG, the MSI WS60 is one of the portable and powerful mobile workstation that you could possibly carry wherever you go.

According to foreign reports, Google “secret tweet” has been decoded and it revealed that the Google I/O 2019 will be happening from 7th May to ...