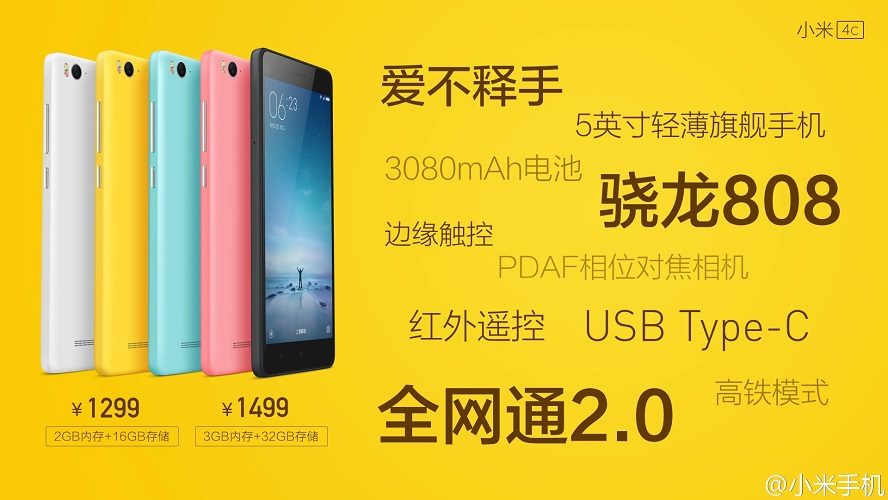 Just in today, Xiaomi has launched the “little price of Android” – Xiaomi 4C smartphone. Prior the launch of this smartphone, there has been alot of rumors circulating on the internet with speculation that the 4C could be a high end flagship smartphone. Is it a next gen flagship? Let’s find out!

What is a truely desired smartphone? A smartphone should comes with 5 inches Full HD display with large screen to body ratio, and a large (>3000mAh) battery packed within it.

Xiaomi then compares the screen size with other smartphone manufacturers such as Huawei and Apple.

Xiaomi 4c is an upgraded Xiaomi 4i.

Previously it was rumored to comes with 9 colors for selection? Turns out there is only 5 color option available.

Instead of comparing Xiaomi Mi 4i, Xiaomi compare the 4c with the Mi 2.

The Xiaomi 4c packed with Qualcomm 64 bit processor – the Snapdragon 808 which is one of the performance beast. It comes with 2x 1.8Ghz A57 and 4x A54 cortex coprocessor which has higher efficiency and more performance.

Mi 4i is classified under flagship level smartphone.

Comparison of the Antutu Benchmark

The Xiaomi 4c display is crafted by LG which is well saturated and have good colour balance. The 5′ Full HD display consisted a large part of the body size which makes it looks attractive.

With the implementation of new sensor and chip, the touching accuracy is largely improved which can recognize the gesture and touch on the edge of the device.

Double tap the edge to snap a picture!

The 13MP camera on the Xiaomi 4c comes with a large Sony IMX258 sensor with PDAF focusing technology. It also comes with a ISP image processor as seen on Snapdragon 810 processor.

Xiaomi didnt specificies the model of smartphone on the left which it claim to be normal. Xiaomi 4c sample image on the right.

Supporting 85 degree wide angle capture, Xiaomi stating the 4c front camera is much more superior than the one in the iPhone 6.

Since it is running on USB Type C connector, Xiaomi state that the Mi 4c can be charged with the new Macbook charger!

Afraid of incompatible ports? buy a converter for just RMB5!

Switching channel would never been that easy!

Set a reminder for your favourite dramas!

Xiaomi 4c will be available on the market tommorow on tmall.com and Xiaomi official website!

e-SIM could be the future of mobile SIM card

The SIM card era has just over! Apple and Samsung has both started to promote the use of e-SIM a.k.a. electronic SIM card where it ...