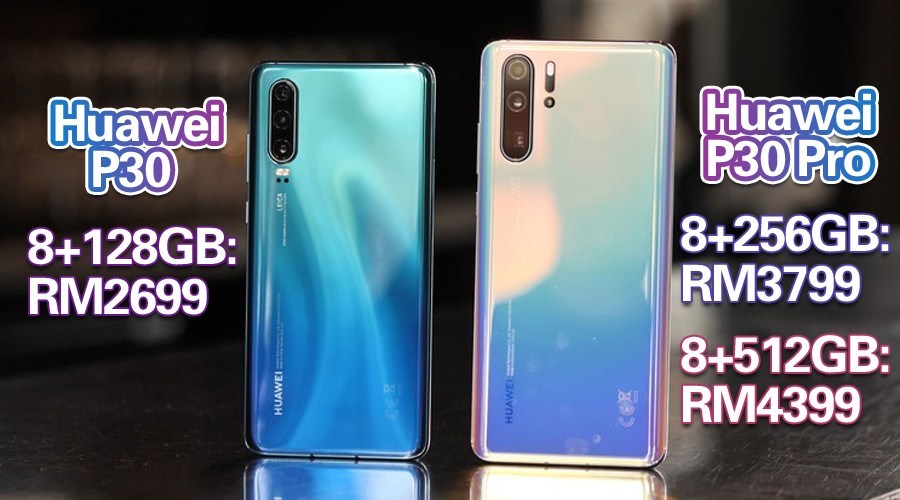 The Huawei P30 and P30 Pro was first introduced on Paris last month. Almost a month later, Huawei P30 has officially launched in Malaysia with price tag from RM2699 for Huawei P30; RM3799 for P30 Pro 256GB; RM4399 for Huawei P30 Pro 512GB and will be launched in 6th April 2019. There will be freebies given which includes Huawei 1TB hard disk, diving case, wireless charging case and more.

The Huawei P30 brings a 6.1 inch display while P30 Pro offers 6.47 inch display. Both sports an in-screen fingerprint sensor with 30% faster recognition speed. The P30 is water resistant up to IP53 while P30 Pro supports up to IP68.

As their original poster captioned :”rewrite the rules”, Huawei has bring a quad camera on the P30 Pro which one of it is a TOF lens. The P30 brings triple camera which lacks of the TOF camera.

The Huawei P30 Pro brings a RYYB sensor that replaces green sensor with yellow sensor to increase 40% of light absorption. These camera is equipped with OIS motor and has the ability to reach ISO 409600 (brighter image at night).

There is also a 16mm~1343mm telescopic camera and supported with OIS and 5x optical zoom, 10x hybrid zoom and 50x digital zoom. The P30 is maxed with a 30x as the maximum zoom power.

Samsung has officially launched the Galaxy A32, A32 5G, A52 and A72 in Malaysian mobile market today. These mid-range smartphone will be on sale from ...