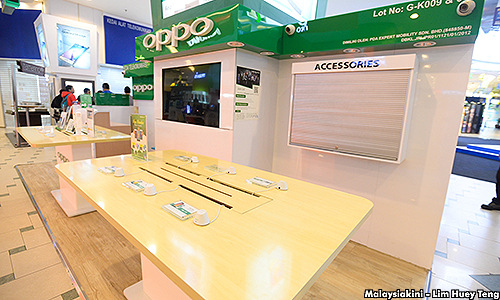 Since the last happening of violent brawl between thiefs and staff in OPPO Plaza Lowyat that sparks controversy on racism and counterfied smartphone/ gadget sold at the largest Malaysian IT shopping center, another similar incident happened on Plaza Lowyat OPPO stores where one of the OPPO shop staff was assaulted yesterday!

Based on MalaysiaKini report, the suspect reached Plaza Lowyat during the operation hours and visited the OPPO retail store to look for one of the staff that drives yellow Toyota vehicle to purchase smartphone. However, he is soon notified that the staff is absent in the stores. The suspect then started to query more details and private information of the specific staff, which then raise alertness from the victim. The victim thus mitigate the topic while leaving the area with elevator. The suspect then went ahead and halt the victim followed by punching into the victim for 4 times. With the assistance of other staff members and public, the suspect was caught red handed and soon passed to police for proper investigation.

According to police sources, the suspect has 2 previous criminal record and he will be charged with intentional assault crime under Malaysia law.

This is not the first time that violent brawl has outbreak in Plaza Lowyat. What are the main cause of the incident? Could this incident related with previous gang fight then went viral last time? How does the authorities guarantees the safety of the public and the worker on the mall?

Nominated as the flagship killer. the new OnePlus 5 will be the most anticipating smartphone that will be launching in this year, possibly by June. ...