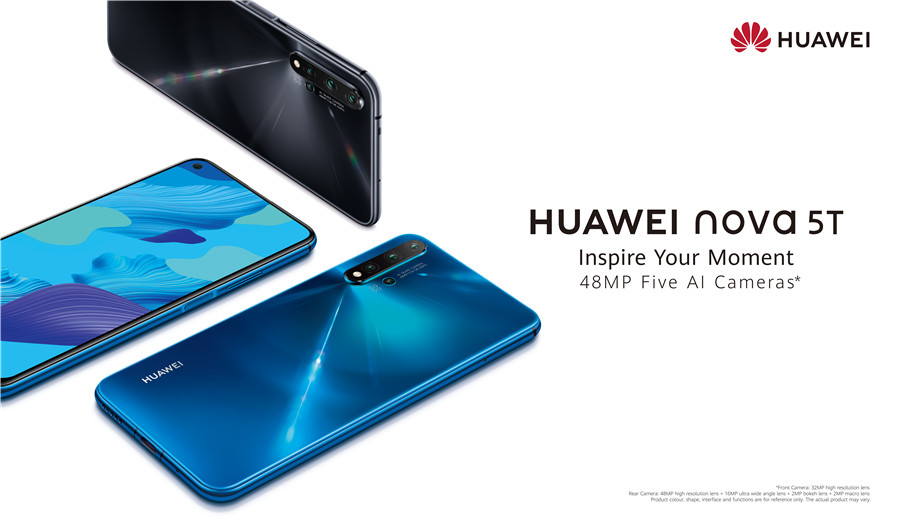 After its brief appearance in KLFW 2019 last weekend, Huawei nova 5T had officially made its way to Malaysian market, being officially launched today in a launch event held in KLCC. In fact, this is also the first global debut of the phone, thus making Malaysia becoming the first country to launch the Huawei nova 5T. Huawei nova 5T comes with powerful specs, including a Kirin 980 Processor, a 48MP quad-camera setup, with an affordable price tag of RM1599!

Huawei nova 5T comes with a 6.26-inch punch hole display, with a very small opening (4.7mm in fact) on the top left corner for the front facing camera, expand its screen-to-body ratio to a staggering 91.67%. The back of the phone looks gorgeous as well, as it utilize a Holographic 3D design glass panel, which offers in 3 attracting colors: Black, Midsummer Purple, and Crush Blue. Do note that it also comes with a side-mounted fingerprint sensor, that only takes 0.3 seconds to unlock.

Specs-wise, the Huawei nova 5T is a powerful smartphone, housing a flagship level Kirin 980 processor under its hood, together with 8GB of RAM and 128GB of storage, 3750mAh battery, and supports 22.5W Huawei SuperCharge technology, which able to charge 50% of the battery in half an hour. Besides, its also running the latest EMUI 9.1, which supports GPU Turbo 3.0 that enable user to experience lag-free and high frame rate gameplay on their phone, making it the perfect gaming phone for mobile gamers.

Huawei nova 5T comes with a “Five AI Cameras” setup, with 4 cameras at the rear and one at he front. The rear quad-camera setup consist of a 48MP main camera, a 16MP Super Wide Angle camera, a 2MP Bokeh lens, and also a 2MP macro lens, which are identical to HONOR 20. Still, its offer a wide range of focal length options for the user, to tackle different shooting scenario.

Huawei nova 5T is priced at RM1599, and pre-order will commence on 29 Aug ~ 5 Sept, and the official sales starts on 7 Sept. Consumers who pre-ordered the Huawei nova 5T will also get freebies worth RM325, including a Huawei Mini Speaker, a Huawei SuperCharge Car Charger, and one year extra warranty (valid until 30 Sept).

Besides of the exciting nova 5T,  Huawei Malaysia today also announced the availability of its latest tablet, the Huawei MediaPad M5 Lite. Priced at RM1299, the MediaPad M5 Lite comes with a 10.1-inch display, Harman Kardon tuned quad-speaker, Kirin 659 processor, and supports the M-Pen. The pre-order will start on 29 Aug until 5 Sept, and consumer who pre-ordered will also get a free Huawei Mini Speaker and a M-Pen, which together worth RM268.

Xiaomi Mi 6 will be launched in Malaysia anytime soon

Xiaomi has just updated their fans with the arrive of its most anticipated smartphone today. A new teaser picture with the caption “Picture Perfect” shows ...