As thin as a sword – Samsung Galaxy A8 hands on! 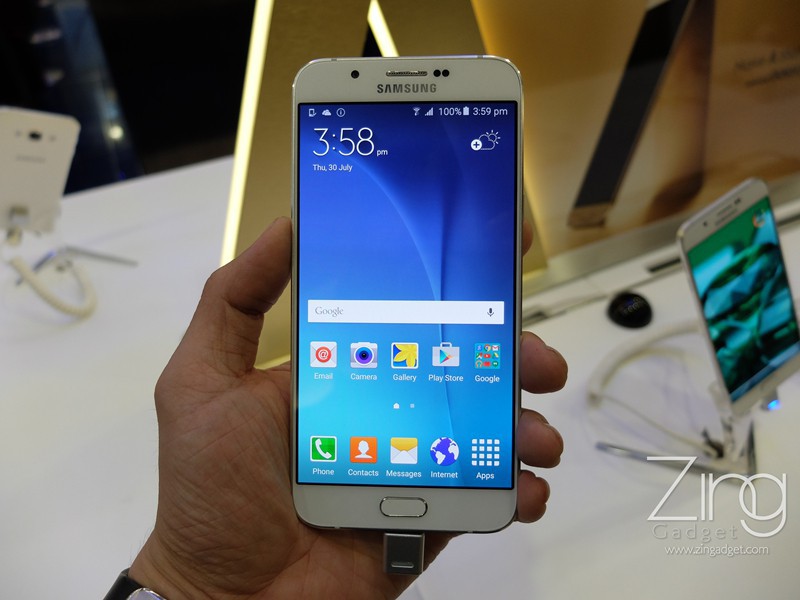 Ever imagine the sensation of holding a sword edge with your barehand? just kidding. Samsung has announced the Samsung Galaxy A8 during 30th June this year which Samsung stated as the the ‘slimmest Samsung smartphone‘ ever made. The design of the A8 follows the similar design structure of the A series smartphone with metallic body and similar body shape design. For now, let’s have a quick look on the Samsung Galaxy A8!

Galaxy A8 specs and stats:-

Probably because of its 5.7 inches display, this creates a remarkable feeling of the enlarged Samsung Galaxy S6 (or is it because most Samsung smartphone has the same design?) and a sense of Galaxy Note 4 when it rest on your palm. The whole device feels thin, light and long; and the slim bezel design makes it even more attractive.

Design is never the limit for Samsung, especially proven on the Galaxy A8. With such slim design, Samsung is still able to fractionize the size frame just like the picture above. The end result is simply amazing – a sensation of 3 dimensional experience which makes it appears like a sword (like,.. really) where you might get uncomfortable if ‘welding’ for too long.

Why do we say the A8 follows the steps of other A generation smartphone? The volume rocker and the power button still locates at the top left side of the smartphone; whereas the SIM slot is placed on the right side on the phone. Both buttons are easily distinguishable even if you are truly asleep…. Nevertheless, one of the SIM slot can be replaced with the microSD expansion up to 128GB!

Honestly, we’re disappointed with the convetional A series design on the A8. The rear cover still uses the same material and texture present on the A7 with little or no sense of improvement. Overall result appears dull..

Looks like protruded camera module are a part of the Samsung now! This could results in unnecessary lens scratch and other camera issues if falls into the ground accidentally.

As usual, a 3.5mm audio jack and microUSB port was located on the bottom of the device. There is also some rubber/plastic material on the bottom which prevent interruption of mobile network signal reception.

Fingerprint sensor was integrated along with the home button just like the Galaxy S5 and S6.

In short, Samsung Galaxy A8 is a mid range smartphone that offers decent specification and performance along with elegant design (and also a fingerprint sensor). With the price point at RM1888, consumers may start comparing with others midrange smartphone which may comes with lower price tag! Luckily, the Malaysia version is imported with the Exynos processor instead of Snapdragon 615 which packs a more powerful punch to the phone.

Get discounts and free gifts worth RM1246 on Motorola + Lenovo 11.11 cybersale!

During the Lazada Online Revolution today, Lenovo Malaysia has officially launched the promotion for selected models of Moto and Lenovo smartphones bundled with discounts and ...