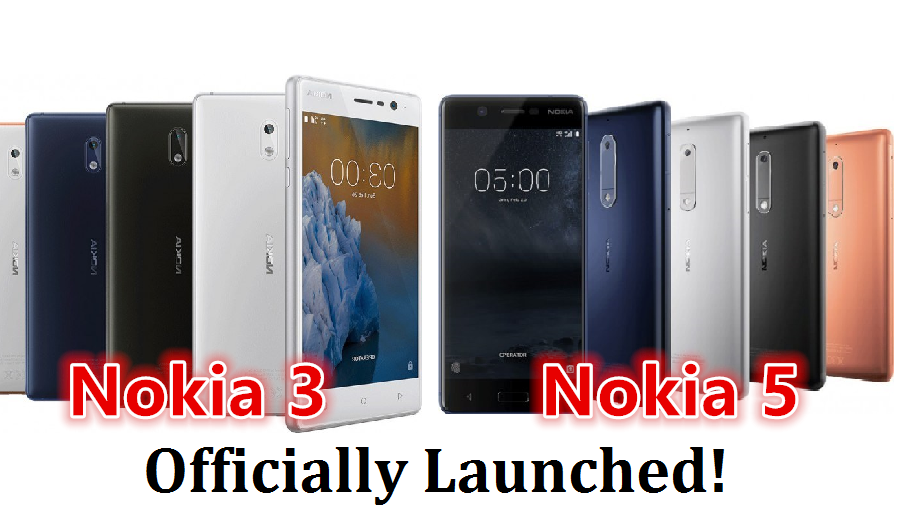 Apart from the revamped Nokia 3310, HMD Global corporation also launched their new Nokia series powered by Google Android operating system. Rumors has now been confirmed that the new Nokia smartphones will be named as Nokia 3 and Nokia 5 which comes with different hardware that caters different consumer group. Let’s have a look on its hardware!

The Nokia 3 is nothing much more than an entry level smartphone. It has their conventional Nokia design along with multiple colored polycarbonate rear cover to choose from. As for its hardware, its 5 inches HD display did an excellent job with it brightness that works effortlessly under sunlight.

Despite being an entry level smartphone given its hardware and price tag, the Nokia 3 is capable of taking a clear shot, given that the 8MP front and rear camera will be able to retain details on object. As for its pricing, the Nokia 3 is priced at €139 (~RM650) and will be available in Q2 this year.

The Nokia 5 is smartphone has better hardware in some aspect. It has a 2.5D curved screen display and a unibody metallic body. The 5.2 inches HD display can reach maximum brightness up to 500 nits which has no issue in bright environment.

The Snapdragon 430 on the Nokia 5 has balanced performance and power consumption along with a 2GB RAM and 16GB ROM. Apart from better camera, the Nokia 5 also comes with front fingerprint sensor on the home button.

As for Nokia 6, HMD Global has a plan to push this smartphone for global release. Its hardware is identical to the Nokia 6 launched in China but it comes with more colour, such as matte black, blue, silver bronze and Arte Black.

The second generation Snapdragon 652 can now support up to 8GB RAM!

As one of the best Qualcomm mid-range processor in year 2016, the Snapdragon 650 and 652 chipset has been widely used in mid-range smartphone as ...