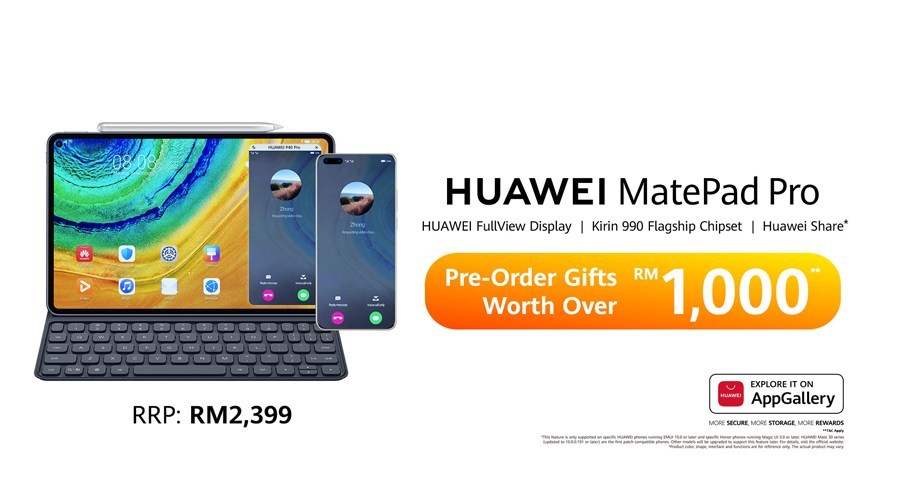 Earlier evening today, HUAWEI Malaysia has held an online launch of the newest HUAWEI product which including the HUAWEI MatePad Pro, HUAWEI P40 series and HUAWEI Watch GT2. The MatePad Pro is the newest addition into its flagship tablet range and it is powered by state of the art Kirin 990 SoC, offering 10.8 inches diplay, 20W quickcharge and 15W wireless charging. Let’s have a look.

One of the distinguishable design of the HUAWEI MatePad Pro in comparison of its rival iPad Pro is the use of hole punch camera in its wide 10.8 inches display. The bezels are much narrower compared to its rival too with up to 90% screen to body ratio and display resolution at 2560 x 1600. It is weighted at 460g and the thickness of it is just at 7.2mm.

HUAWEI Malaysia has offered this in midnight grey and pearl white.

As for the technical specifications and its performance, the MatePad Pro is powered by Kirin 990 SoC and it has 7250mAh battery which supports 20W quickcharge and 15W wireless quickcharge.

In the meantime, it can also provide reverse charging rated at 7.5W. The battery itself is expected to last up to 12 hours of continuous use.

As for its speaker, the audio from the HUAWEI MatePad Pro is surrounded by quad stereo speakers and uses Histon 6.0 multi-channel 3D audio and subsequently tuned by HARMAN KARDON. It also has 5 microphones that support 360 degree noise cancellation and audio pickup.

It also support new tablet landscape display where you can now open applications side by side. There are over 3000 application supported on the system.

The HUAWEI MatePad Pro also have parallel view feature and developers can get this feature enabled in their app in just 2 hours through UIKit service. MatePad Pro also supports synchronization and display of your HUAWEI smartphone which is known as Multi Screen collaboration.

The HUAWEI MatePad Pro also supports its proprietary stylus known as M-Pencil. The M-Pencil can be attached to the side of the tablet for wireless charging. When used on MatePad Pro, it can detects up to 4096 pressure level and the tip of the M-Pencil makes it convenient to draw sharp angles or shades. By charging the M-pencil for 1 hour, the M-pencil can last up to 10 hours!

There is also the Smart Keyboard where it keys has a travel distance at 1.3mm. It also provides up to 60/70 degree of keyboard support.

Lastly, the HUAWEI MatePad Pro (WiFi edition) is now on sale for RM2399. The pre-order for this unit starts from 3rd to 10th April and you can get free gifts worth RM1000 which includes the Smart Keyboard (RM499) and the M-Pencil (RM299), HUAWEI Cloud Storage 50GB for 12th months (RM46.80) and WPS office Premum for a year worth RM52! It also comes with 3 months HUAWEI Video Premiu Access and Member Center rewards up to RM2381. Click here to learn more.

As the Honor 8 Pro EMUI beta recruitment program has commenced for a period of time, Honor official has announced that there will be 4 ...