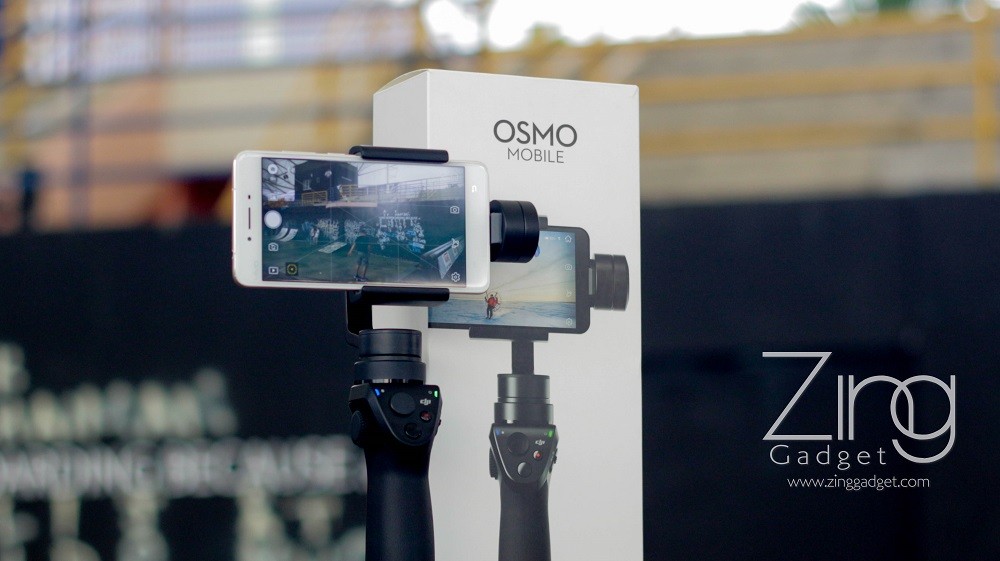 The moment DJI Osmo hit our shores last year, it was a notion of change for avid videographers around. With much feedbacks received, DJI decided to shift into 2nd gear with the new DJI Osmo Mobile. You guessed it, instead of a camera head gimbal, your smartphone is now the eye capturing your life moments.

Previously the DJI Osmo has 3 detachable parts. This time, the DSJI Osmo Mobile comes in just one part – the whole device with your smartphone! This steadicam is now something to behold for travelers too, with a total control joystick-like-PS4-controller to give you total command of what you see (or in this case, what your smartphone sees)

After downloading the DJI Go App and setting up your Bluetooth (compared to a battery drainer Wi-Fi connected DJI Osmo previously) set up is rather straightforward and you are just one step away from a smooth sailing production. 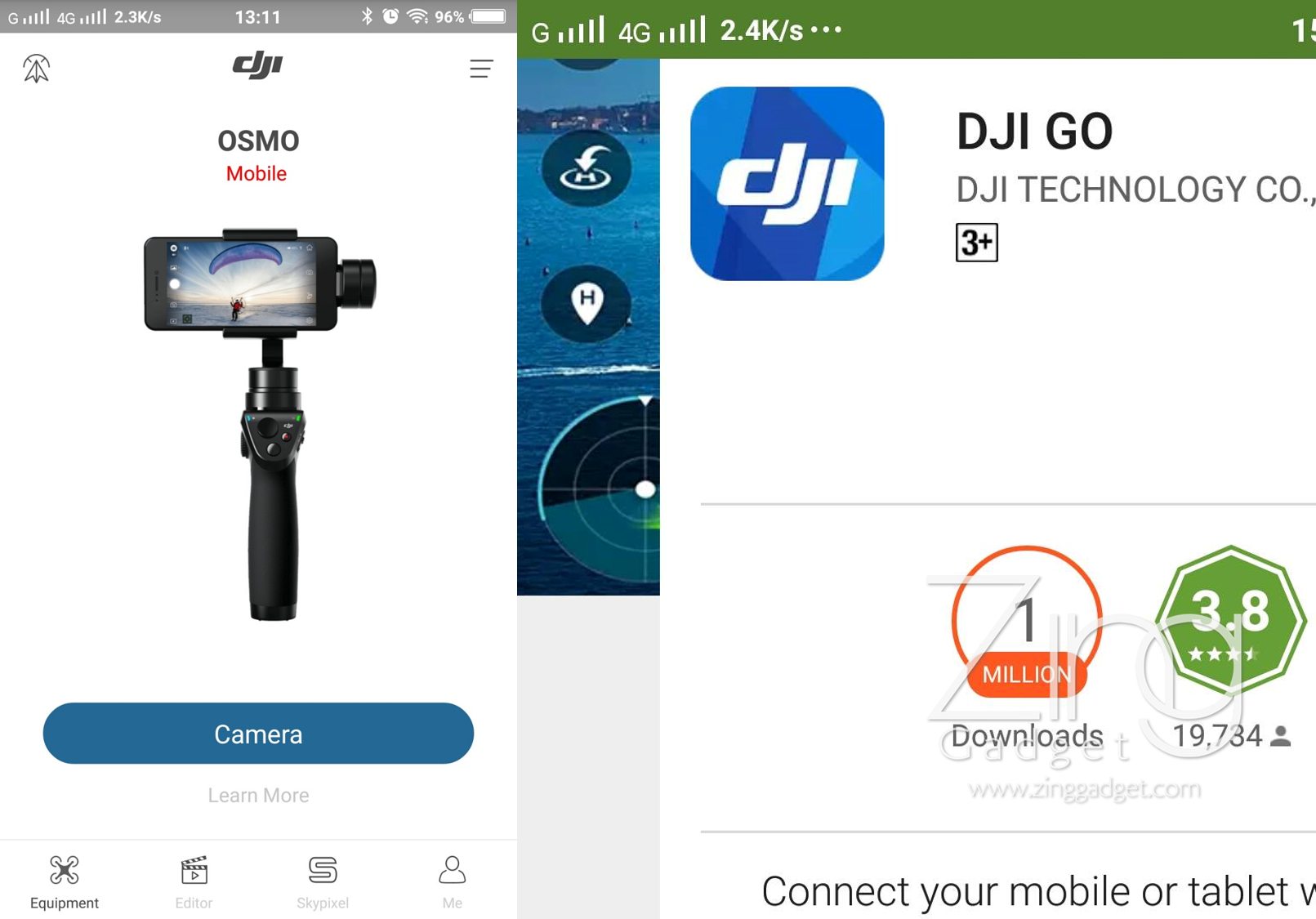 What’s so mobile?
The specifications are more or less the same as the previous model, the DJI Osmo which you can check out it out right here

So what makes the it different compared to its predecessor? Simple, your smartphone. The Osmo Mobile’s smartphone mount supports up to 5.5 inch size phones (sorry six inches) to get you going. The next step is literally allowing the Osmo Mobile to lead you into a world of wonderness. Allow these 4 modes to get you a grip on the awesomeness the Osmo Mobile brings.

Points straight ahead to give you more freedom to roam around 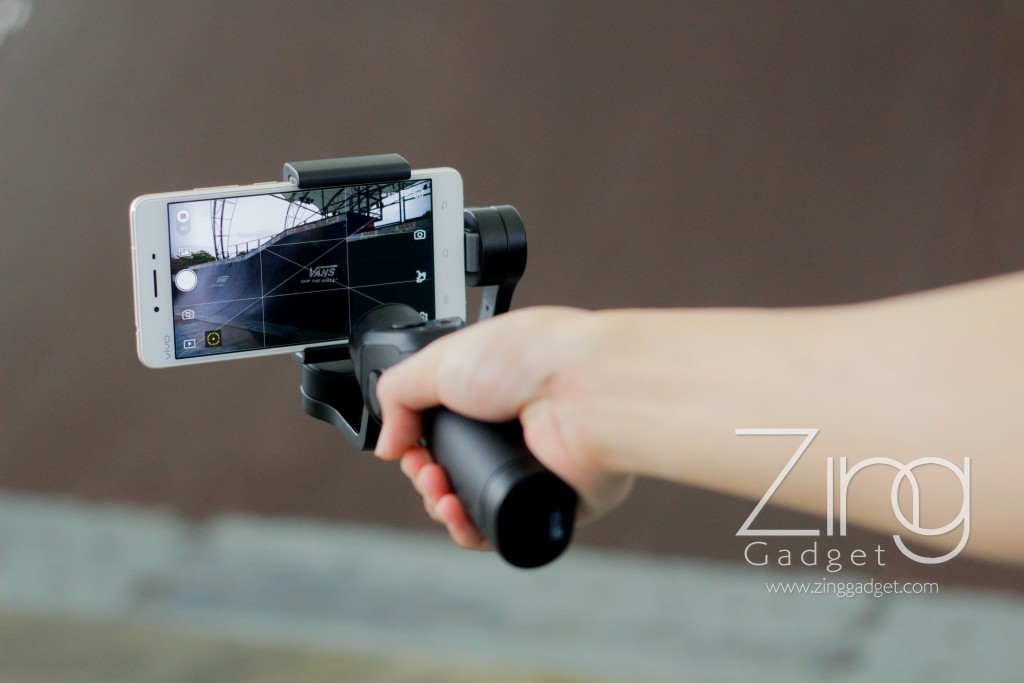 The common height for standard orientation or high angle 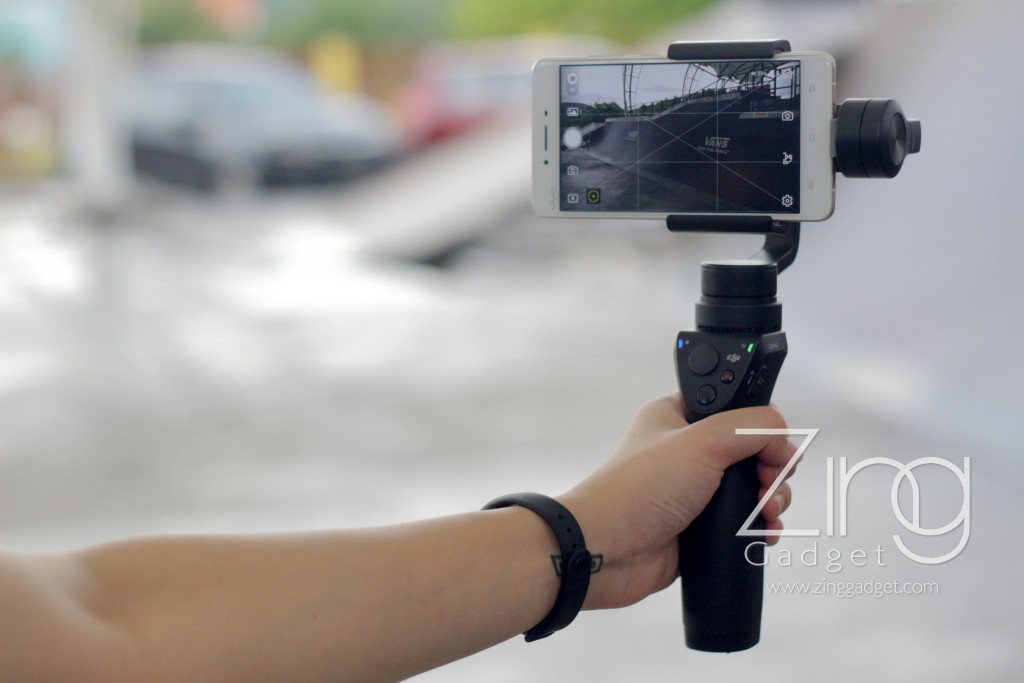 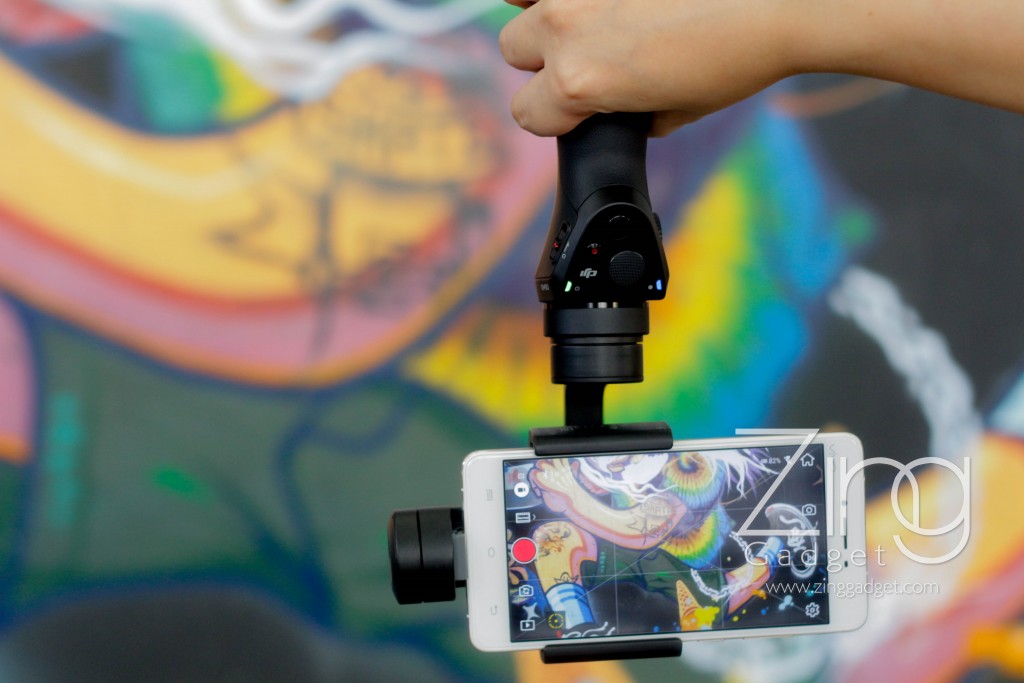 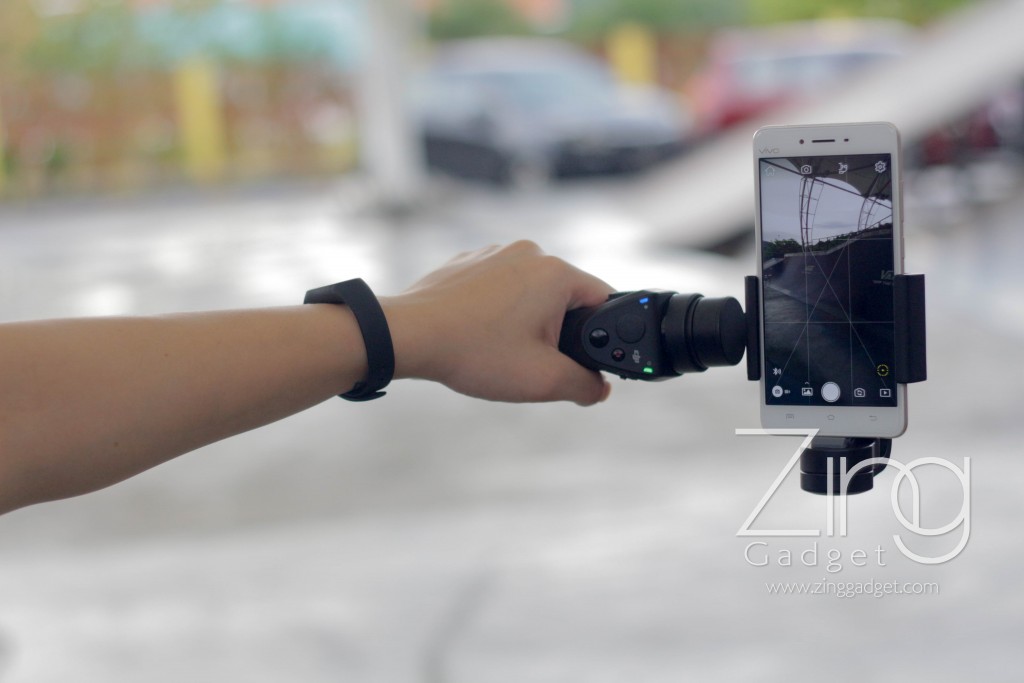 Testing all of these functions are fun when you slowly get a hold on which particular angle you are looking for while filming your shots. Just remember to double tab on the trigger when it gets a little sticky or out of angle.

One feature that totally stole the show for the Osmo Mobile would be the Active Track feature, which focuses on one subject that follows you around to guarantee that smooth movement you’re looking for – and I mean, smooth like butter smooth. To test it out, we head to an open skateboard to see just how “action” the Osmo Mobile is.

The Timelapse and Motion Timelapse came to be a new feature added on the Osmo Mobile recently too, and they did not disappoint. For maximum effect, get the Osmo tripod if you want the best shot and avoid those shakiness.

I got the power!

For those who experienced the Osmo previously hands-on, knew that the battery life is way shorter than the ones at Outlast. However this time with the gimbal away, all now lies on your smartphone to make it mobile – giving the Osmo Mobile a 4.5 hour battery lifespan – and a big improvement from the previous model. The little jack input below the trigger isn’t an audio jack, but it’s actually the charging cable which leads to an USB end – so you can charge it with your powerbank! 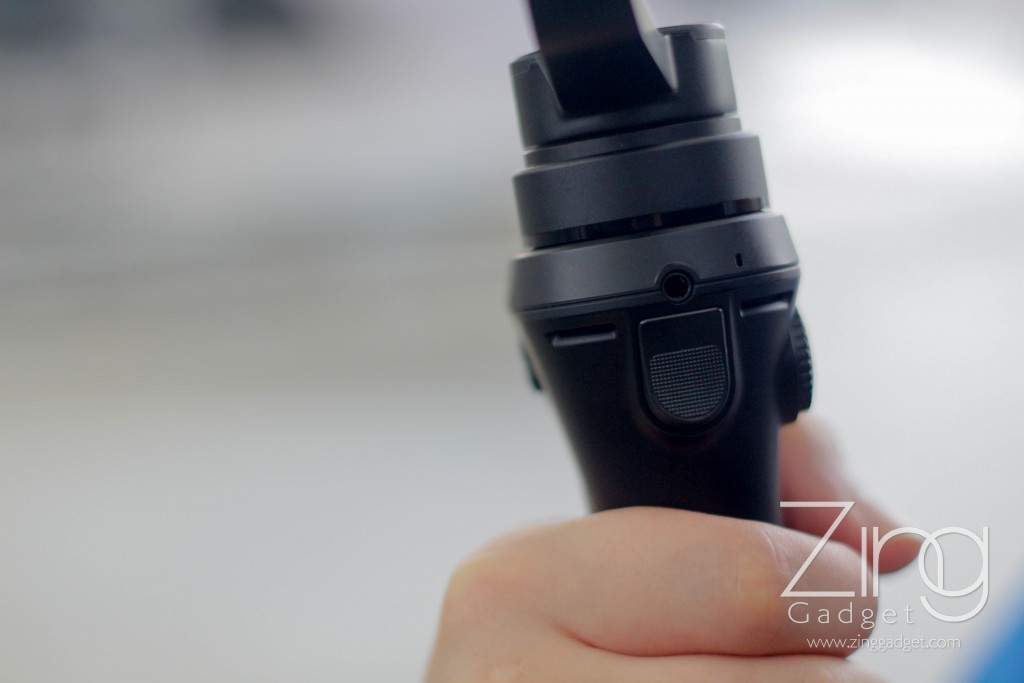 See that hole right there? It ain’t an audio jack!

To cap it all in one, this is what we got out of the DJI Osmo!

There are still room of improvements for the DJI Osmo in my opinion. Throughout my week of reviewing this dude I realized it was not easy from the get go and it may annoy some new users. The device tends to “vibrate itself” when you try to put it on standstill as you try to create time lapse, making the device fall on itself and land head first on one of the axis gimbals. It does rotate itself sometimes so you may be keeping your index finger on the trigger most of the time. 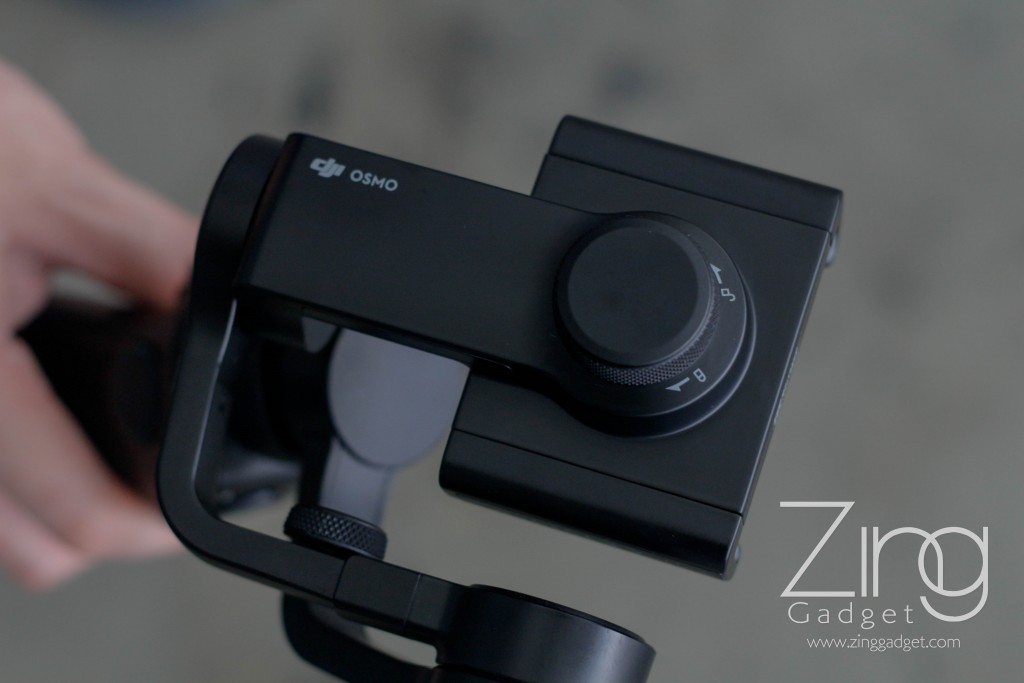 Stop moving will ya?

One note that got me thinking was the focus point while recording. The lens will always be on auto focus, which simply means there may be constant clear/blur moments in your recording. This boils down to the already set auto focus camera lens your smartphone has as it could not be modified like how we want out of a DSLR. Perhaps there are some extension tools may be of help that we could not get our hands on.

The DJI Osmo Mobile is priced at a respectable RM 1,399 (incl. GST) that gives you smooth and total control for an action video camera. It is meant to make you feel easy as you capture or record any moments you see. The Active Track is one feature to look out for – with a lot of practise. Overall the Osmo Mobile gives you that breathtaking cinematic smooth videography that drones and trailers have been working on. We are still searching for that perfect handy-go-steady-cam that will make us wow not once, but always. Gimbal stabilizers for smartphones are the future gadgets, and DJI is certainly on that road.

P/S
Thanks to our friends at ECS Astar Sdn Bhd for the review unit of the DJI Osmo Mobile. You can call them at (03) 6286-8222 for enquiries of the latest stuffs from DJI!

Recently Huawei has been busy sending out their official media invitation for the launch of the Huawei P9 happening in Bali Indonesia. When we first ...