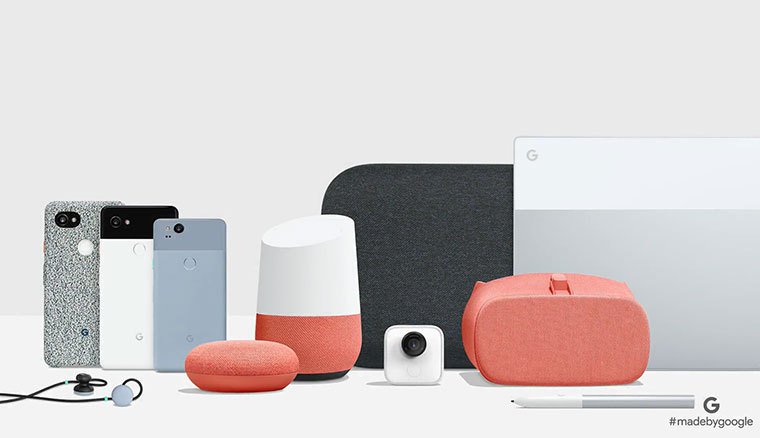 Earlier at San Francisco, 12 a.m. today, Google has officially bring us some of their fancy gadgets and the most anticipated Android guys smartphone – the Google Pixel 2 and Pixel 2 XL right from Made by Google event. Let’s have a look on some of the latest fancy tech gadgets proudly #madebygoogle!

On the other hand, the feature packed Pixel 2 and Pixel 2 XL also brings some fancy tech such as Google Lens, e-sim card and AR Core.

The Google Home Mini is kinda smaller from the Google Home smart speaker but it does everything you ask, just like what Google Home did. It is powered by Google AI assistant and retails at $49.

Similar with the Apple Earpods, the Google Pixel Buds is designed after it cancelled the 3.5mm audio jack from the second generation Pixel. It plays your favourite music for around 5 hours and instantly translate languages to your preferred one. Currently, the Pixel Buds supports English, French, German, Japanese and Portuguese language.  It retails at $159.

The new Daydream View sounds fancy but it does all the job that Daydream VR previously did. However, there would be some compatibility upgrade for the new Pixel 2 smartphones and it retails at $99.

The Clip is a small miniature camera that sits everywhere you place it, be it a table or your pocket. The 12MP camera supports auto-f0cus and can be trained to capture specific objects based on the machine learning algorithm sets within it. However, it is not an action camera like GoPro because it isn’t water or dust resistant but more designed for other scenario. The Google Clips starts at $249.

Puma is a well known brand in sport industry with its apparel and accessories. Recently, they have ventured into the smartwatch industry and launched its ...