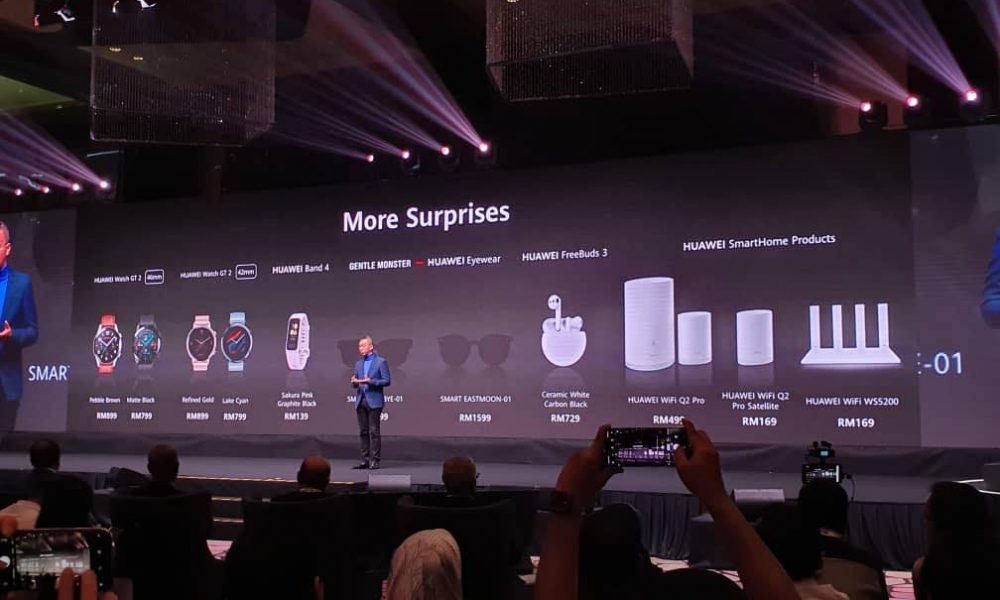 In the HMDC 2019 happening today, Huawei has brought us the new Mate 30 Pro along with few exciting accessories. These are the Huawei Watch GT2 smartwatch, Freebuds 3, Huawei X Gentle Monster which retails at RM799, RM729 and RM1599 respectively.

Huawei Watch GT2 series adopts a new product design style and has two versions to choose from: 42mm version and 46mm version, all made of one-piece stainless steel, the screen of the watch is 1.39-inch AMOLED screen, and support Always-on mode.

The Huawei Watch GT5 series is equipped with the Kirin A1 chip, which is the world’s first smart wearable device with Bluetooth 5.1. With the help of the Cortex-M7 processor, it has achieved extremely low power consumption of 10uA/MHz compared to the market. The average power consumption of 30uA/MHz is as low as 20uA/MHz! The Huawei Watch GT2 46mm have a standby time of up to two weeks, 30 hours in GPS mode, and 30 minutes in music and call mode. In addition, the standby time of the Huawei Watch GT2 42mm is one week.

It also determine the heart rate via TruRelax technology and alert its user to exercise if they have been sedentary for too long.

Huawei Freebuds 3 is the latest wireless Bluetooth headset from Huawei. It is equipped with Huawei’s self-developed Kirin A1 chip, which supports Bluetooth 5.1 connection and Bluetooth dual channel connection, which can achieve low latency and low power consumption. Huawei FreeBuds 3 adopts an open design, and is also a wireless headset that can manually control noise reduction. The volume can be controlled by a single rotation on the mobile phone, and the noise generated outside the headphones can be eliminated. In terms of battery life, the headset itself will last for 4 hours, and the charging storage box can achieve 20 hours of battery life.

Also the Huawei X Gentle Monster has been launched today. It features a simplistic design with no physical keys. Wireless antenna, charging module, microphone, chip, speaker and battery are located in the frame of the glass.

You can use it to accept calls by tapping the frame twice. It can also be wireless charged in a charging bag.

The Huawei X Gentle Monster is rated at at IP67 and supports Bluetooth & USB C port.

Pay with Razer Pay this June and win a Proton Iriz

Razer Pay has garnered the attention of gamers and local e-wallet consumers and it has become one of the mainstream e-wallet app. It is only ...